The Hyundai ix35 has been given a facelift, and we've driven the new-look Nissan Qashqai rival 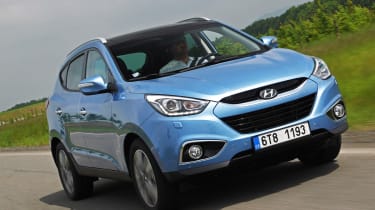 This minor makeover aims to keep one of Hyundai’s top-selling models feeling fresh. We’re not sure the brand has gone quite far enough, with no major updates to the chassis or engines – which leaves the ix35 at risk of falling behind some of its crossover rivals. But the new car is still impressively comfortable and practical.

In 2012, Hyundai released six new or updated models, but it’s slowed down a little this year, with the facelifted ix35 driven here set to be one of the few new products we’ll see. Such is the subtlety of this facelift that you get the sense Hyundai’s product onslaught may have run out of steam.

Aside from a set of classy new headlights and some redesigned tail-lamps, there aren’t too many visual tweaks. However, changes have been made under the skin, to ensure the ix35 is more “road-focused”.

Although we drove a late-stage prototype, the updates over the old car can definitely be felt, with softer front suspension mounts helping cut noise and vibration in the cabin from rough roads.

We just wish more tweaks had been made to the 1.7-litre diesel engine in our model – it’s still a bit too rattly under acceleration. Hyundai assured us that emissions and fuel returns would be slightly improved from their current 49mpg and 139g/km figures.

A new steering set-up has been introduced, allowing drivers to pick between Normal, Comfort or Sport modes, but the ix35 still feels a little too soft to be considered sporty.

On the plus side, the ride is comfortable, and the 591-litre boot is nearly 200 litres bigger than a Nissan Qashqai’s. Inside, there’s a new sat-nav system, which uses a larger seven-inch touchscreen, and the option of a tweaked seven-speaker stereo. Slightly better quality materials are promised, although we didn’t notice any major changes in our pre-production test car.

Trim options are set to be brought into line with other Hyundais, so that means the new Premium SE model driven here will be the range-topper. Among other things, it gets the Media Pack, including sat-nav and a reversing camera, as standard – on Premium models this is a £1,220 optional extra.