We hit the road in pioneering hydrogen-fuelled crossover 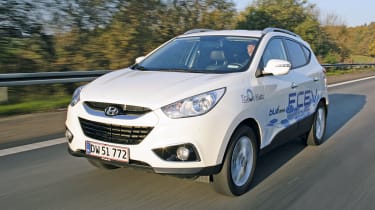 With 136bhp, the fuel cell in this Hyundai is one of the most powerful in the business. Its near ambient pressure cell means the driveline is quiet and impressively refined. But the car itself needs a lot more work before it can match the best prototypes from rival manufacturers. Hydrogen fuel cell cars are getting ever closer to reality these days, so even development cars should drive better than this.

It's the most common element in the universe, but developing hydrogen into a viable fuel is proving to be a very lengthy and expensive task for the world’s car makers.
Hyundai has been working on fuel cells since as far back as 1998, with early test vehicles based on the Tucson and Santa Fe SUVs. But these have now been replaced by the latest ix35, launched last year. A fuel cell version is earmarked for production in 2015, so we test drove a prototype to see what buyers can expect.
The fuel cell uses a reaction that creates electric current when hydrogen and air are exposed to a platinum catalyst. This type of power source was first developed by General Electric in the fifties and was used by NASA to propel its Gemini space probes.

In the ix35, two high-pressure hydrogen tanks are mounted in the boot, giving a range of 348 miles, while the electric motor produces 136bhp and 270Nm of torque – enough to provide 0-62mph in 14.1 seconds and a top speed of 100mph.
As with pure electric vehicles, the ix35 is lively from a standstill, but as the motor reaches its peak revs, efficiency falls off markedly and performance becomes very sluggish above 50mph.
What is impressive, though, is the refined, quiet operation of the hydrogen car. The fuel cell has a turbo to maintain pressure and to purge it of water when the temperature drops. On the road, all you hear is a low moan when accelerating hard. Hyundai claims it has successfully cold-started its fuel cell at minus 25 degrees Celsius, but it takes a couple of minutes to get it up to full power.
The prototype’s dynamics are less impressive, however. The regenerative brakes are grabby, so stopping always involves a series of lurches, no matter how sensitive you are with the pedal. The electronic steering is very light and completely lacking in feedback, while body control is poor, as the car rolls a lot over large bumps. This is a shame, as the first examples of Hyundai fuel cell vehicles have handled immaculately until now.
Of course, there are bigger questions about hydrogen fuel for cars that are still to be answered. The problems of where the fuel will come from, how to store it and how to extract it from renewable resources still need to be solved. But Hyundai seems well advanced with fuel cell design at least, if not the dynamics of its test car.