Petrol-electric saloon has proven a hit in the US. We see if it can repeat feat here 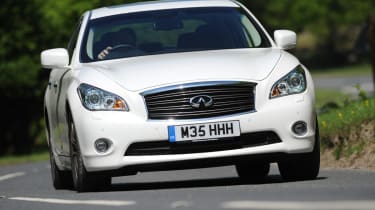 The M35h is Infiniti’s first hybrid, but having tested the diesel M saloon against the Lexus GS 450h early last year – where it took victory – we’ve already found out that this relatively unknown saloon has a lot to offer.

Eye-catching styling, great customer care and generous standard equipment are all part of its appeal, yet the M35h has to beat BMW’s new offering if it’s going to attract hybrid customers. And Infiniti isn’t afraid to be bold. For starters, the M saloon’s styling is certainly something different.

The flowing lines are supposed to give the appearance of a coupe, and while the result isn’t entirely successful, there’s no doubt that it offers a refreshing alternative to the conventional-looking 5 Series.

Interior space isn’t bad, either: rear legroom is decent and the boot is only 25 litres smaller than the BMW’s, at 350 litres, although that’s still 100 litres down on a diesel M saloon. Up front, the comfortable electric seats offer a wide range of adjustment, but the cabin feels a little cramped compared to the 5 Series’.

Yet while the design is a bit old-fashioned, the analogue clock and curved dash add a splash of retro appeal. Quality is superb and there are lots of hi-tech features like a reversing camera, touchscreen sat-nav and cooled seats.

Under the skin, the technology is very similar to the BMW’s. There’s a six-cylinder petrol engine matched to an electric motor, driving the rear wheels. The Infiniti’s V6 has a bigger capacity than the BMW’s straight-six, but despite having a slightly higher combined power output, performance is very similar.

As with the 5 Series, the smooth switchover between modes means you find yourself studying the energy monitor to watch the power flow. Even better, we found the Infiniti ran in full electric mode for longer than the BMW, which might explain the car’s slightly better on-test fuel consumption.

Unfortunately, while the engine is smooth and road noise is well isolated, the driving experience is compromised by a lack of body control and steering feel. Plus, despite a relatively soft suspension set-up, the ride is disappointingly unsettled at low speed.

As a result, the M35h feels cumbersome compared to the BMW, while the seven-speed gearbox has a slower shift action and the brake pedal’s feel is inconsistent. Still, performance and refinement are a match for the BMW’s, and the car comes with more standard equipment.

The Infiniti is comfortable and well built, and with a strong reputation for customer care it’s easy to see why this brand is so well established on the other side of the Atlantic. But is the M35h good enough to beat the new petrol-electric 5 Series – and is it the best luxury hybrid in the class?

Chart position: 2WHY: Infiniti is slowly establishing itself in the UK, and the M comes in petrol, diesel and hybrid form. The M35h is available only in well equipped GT Premium trim.