Can the new hybrid outclass its eco rival? And is it a better buy than a diesel 5 Series? 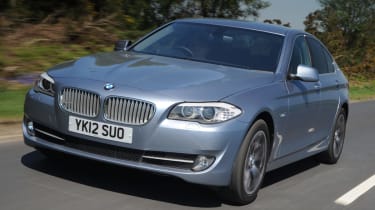 BMW has realistic ambitions for the ActiveHybrid 5 in the UK. The car is a showcase of the company’s hybrid technology rather than a volume seller, so is likely to be a rare sight. Yet subtle styling changes mean it will stand out from other 5 Series models.

Our test car’s Bluewater metallic paint and metallic grille slats are exclusive to hybrid BMWs, while big ActiveHybrid badges leave no doubt about this car’s power source. It’s not to all tastes, but early adopters who want people to know they have a hybrid will love it.

They’re unlikely to be disappointed with the technology, either. BMW has combined the 535i’s 302bhp 3.0-litre six-cylinder turbo and eight-speed auto gearbox with a 54bhp electric motor and lithium-ion battery pack.

However, the 5 Series’ weight means pure electric running is limited. BMW claims the ActiveHybrid can travel at up to 37mph for around two miles in zero-emissions mode, but even tiny throttle inputs bring the petrol engine to life, so you can only really run solely on electric when crawling at low speed.

Still, switch the BMW drive select button to ECO PRO mode and the six-cylinder shuts down during high-speed coasting, while in all modes regenerative braking recharges the battery and stop-start ensures energy isn’t wasted.

Even more so if you bring diesel into the equation – the 530d is £8,100 cheaper and emits 139g/km with the £1,525 optional auto. Plus, during our test the Infiniti was more efficient than the BMW.

There’s nothing between our duo for performance, though. Both cover 0-60mph in 5.7 seconds and had near-identical responses in kickdown. With the BMW’s electric motor boosting the engine under hard acceleration, and a combined output of 335bhp and 450Nm, it feels effortlessly rapid.

Crucially, the ActiveHybrid 5 swaps seamlessly between boosting, charging and coasting, which means you find yourself studying the energy monitor on the iDrive screen to see what the powertrain is doing. And the BMW’s eight-speed auto is superb, with smoother shifts than the Infiniti.

Better still, although the hybrid drivetrain adds 140kg to the car’s weight, the 5 benefits from the engaging rear-wheel-drive handling, beautifully weighted controls and agility for which BMW’s saloon has become famous. Tauter body control, sharper steering and a more composed ride mean it feels far less cumbersome than the M35h.

It’s refined, too – the engine is silky smooth, road noise is well isolated and, with the £985 optional active dampers, the ride is surprisingly compliant.

Inside, apart from a few ActiveHybrid badges, it’s the same top-notch cabin as in any other mid-spec 5 Series. The logically laid-out and beautifully executed dash, perfect driving position and faultless quality leave you in no doubt that this is a premium hybrid.

Thanks to a longer wheelbase than the Infiniti, rear legroom is excellent, while part-electric seats, Bluetooth, sat-nav, parking sensors and cruise control are standard. Still, despite the decent kit, the M35h gets even more goodies – and adding options to the BMW can get costly.

Private buyers, though, will be encouraged by the 5 Series’ substantially better residual predictions and superb pre-paid service pack.

Chart position: 1WHY: BMW already excels with its clean and economical EfficientDynamics saloons. Now it’s expanding its eco-friendly line-up with this hi-tech hybrid.