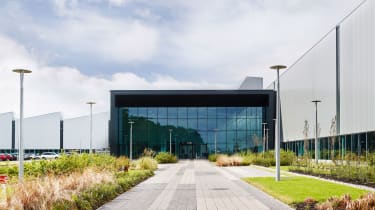 You know it's not your run-of-the-mill factory opening when Her Royal Highness turns up to cut the ribbon. And that's exactly what happened today at Jaguar Land Rover's new high-tech £500 million engine building facility.

The new plant, which is the size of 14 football pitches, is JLR's largest investment for in-house engine design and manufacturing in a generation. It will be home to the new 'Ingenium' range of engines, that will underpin the upcoming generation of both Jaguar and Land Rover products, starting with the new XE saloon.

The first engine that will roll off the state-of-the-art production line will be the all-new 2.0-litre diesel, featuring in the XE from launch and eventually finding its way into cars such as the Land Rover Discovery Sport, amongst others. 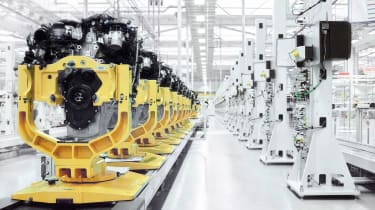 JLR is extremely proud of this Ingenium diesel as, when fitted to the XE in 161bhp form, it beats the equivalent BMW 3 Series for both performance and efficiency, with a claimed 75mpg and 99g/km of CO2.

The JLR Engine Manufacturing Centre, located in Wolverhampton and adjacent to the M54, has created a total of 6,900 jobs in the UK, including many in the supply chain. £150 million was also spent on advanced assembly robots and laser drilling, to ensure exacting standards.

A total of 245 engine parts will be put together by a 1,500-strong team of JLR employees, to complete the finished powerplants.

The first XEs will roll of the production line with these engines in next year, for deliveries in May 2015.

Click on the gallery picture for more views inside the new JLR engine plant.