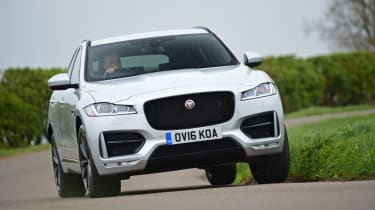 Jaguar has introduced a new turbocharged petrol engine option on three models – the XE and XF saloons plus the F-Pace SUV.

All three can now be fitted with a fresh 2.0-litre turbocharged petrol unit, producing 296bhp and 400Nm of torque. It’s the same engine available in the new £49,900 four-cylinder F-Type.

• New Jaguar E-Pace SUV: everything we know about the baby F-Pace

The engine’s impact is felt most in the XE – the lightest and smallest car of the trio. With the new powerunit on board, Jaguar claims 0-62mph in 5.5 seconds while fuel economy comes in at 41.5mpg with CO2 emissions of 157g/km.

Alongside the introduction of the new engine option, Jaguar has tinkered with the equipment and technology on-board all three models for the 2018 model year.

The XE and XF saloons can now both be specced with a gesture controlled boot lid, and are also available with Jaguar’s Configurable Dynamics tech, allowing drivers to alter gearbox, throttle and steering settings. All three cars get the firm’s latest driver assist and safety technology too, with new features such as forward vehicle guidance and traffic detection.

Does 296bhp of turbocharged petrol power sound good to you? Let us know in the comments.