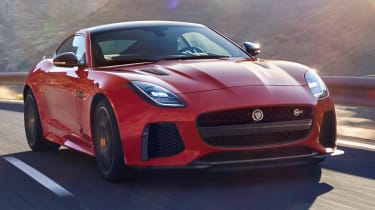 Jaguar Land Rover’s Special Vehicle Operations (SVO) division, responsible for the new XE SV Project 8, will build its own bespoke models in the future, according to brand boss John Edwards.

Rather than sticking to enhanced versions of existing models like F-Type-based Project 7 and XE-based Project 8, the SVO division will also target cars like the Mercedes-AMG GT by creating a totally unique sports car of its own.

“Deep down we want to make our own model,” Edwards told Auto Express. “Just look at  the success of the [Mercedes] AMG GT.”

It’s possible that Jaguar could create a rival for the AMG GT by using  the mechanical make-up of the F-Type  SVR (right) and dressing it in a bespoke body, with a unique interior.

Edwards emphasised the need for  SVO to get its early ‘Project’ cars right before embarking on standalone models, however. While it’s currently unclear which JLR products  are next in line for the SVO treatment, Edwards explained that the Jaguar F-Pace and upcoming Range Rover Velar SUVs had “great potential”.

The new XE SV Project 8 went from first sketch to official reveal in 12 months, proving JLR has the ability to accelerate development of its future bespoke sports car should it wish. Edwards praised the freedom his team of engineers had been given for the Project 7 and Project 8, in fact, and confirmed he was looking towards the next generation of products.

Would a bespoke Jaguar SVO sports car be a hit? Have your say in the comments...