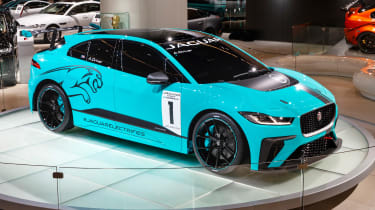 Jaguar has launched a racing version of its I-Pace electric car. The model will form the basis of a new production car support series for Formula E and is due to begin with Formula E’s fifth season in 2018-19.

The I-Pace eTrophy will be contested by up to 20 cars, with all entries being run centrally and seats being offered on an ‘arrive-and-drive’ basis to competitors.

The series will support every round of Formula E, racing on the streets of major cities including New York, Paris, Rome, Sao Paulo and Hong Kong.

Jaguar Land Rover’s Special Vehicle Operations (SVO) division has designed and built the car, which has been unveiled at the Frankfurt Motor Show.

The full technical specifications and performance figures for the I-Pace eTrophy have yet to be announced, but Jaguar says they’ll be confirmed ahead of the start of the season next year. The manufacturer has also said that one car will be raced by a special guest ‘VIP’ driver at each round. 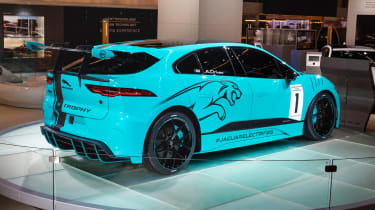 Commenting on the car’s launch, Gerd Mäuser, the chairman of Jaguar Racing, said: “With the launch of the Jaguar I-Pace eTrophy, we’ve strengthened our commitment to battery electric vehicles, international motorsport and Formula E.

“I’m looking forward to seeing a full grid of I-Pace race cars in late 2018, soon after the first I-Pace road car hits the streets in Europe. Ultimately, this innovative series will serve to enhance the technology used in our future electric vehicles and benefit our customers. The I-Pace eTrophy will improve the spectacle for fans and gives young drivers a ladder into Formula E. We expect our series to be a sellout.”

What do you think of Jaguar’s I-Pace eTrophy series? Let us know in the comments… 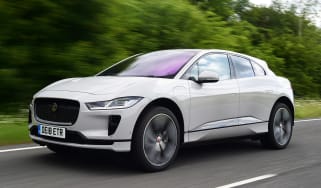