Jeep Renegade shown off in Geneva 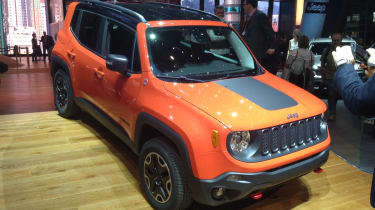 This is Jeep’s new baby SUV, called the Renegade. It has just been unveiled at the Geneva Motor Show, with the new model marking the brand’s entry into the small SUV segment. It faces some tough opposition in a crowded market, tackling the likes of the Renault Captur and Peugeot 2008 head on.

Initial reports hinted that the baby SUV would be badged Jeepster but Jeep has confirmed it will wear the Renegade moniker. Clearly inspired by the classic Wrangler, the baby SUV wears a very angular body, with the squared off wheel arches and boxy design hinting at its focus on off-road ability.

The latest off-road tech has been borrowed from the new Cherokee, including two advance all-wheel drive systems, called Active Drive and Active Drive Low. Both use Jeep’s Selec-Terrain system, which provides up to five modes for increased performance both on and off road. The Renegade is also the first small SUV to feature a disconnecting rear axle and power take-off unit (PTU).

Another car that looks way better in the flesh. I'm liking the Jeep Renegade. https://t.co/60x12QcWgq

Inside, the interior is modern but rugged, with an integrated infotainment system and steering wheel mounted controls. Jeep has based the interior of the Renegade on a new design language called Tek-Tonic, which combines soft and tactile materials with rugged and functional detailing.

Under the skin, Fiat’s Small Wide 4x4 architecture – currently underpinning the 500L and 500L MPW – will be used. Jeep has also announced 16 powertrain combinations will be available across global markets. There is no confirmation on what engines will be fitted to UK models but the two Multijet diesel powertrains from Fiat are likely candidates. Options should also include a 1.4-litre petrol and 1.4-litre MultiAir Turbo, with power being transmitted via the new nine-speed automatic gearbox or two manual options.

Official pricing is yet to be revealed but we can expect a figure around £14,000 when it arrives at the end of this year.

Welcome to our Geneva Motor Show hub page, scroll down for all our Geneva content...
New 2020 Jeep Renegade 4xe plugs in with up to 134mpg

FCA is on the rise, and we’ve checked in with Alfa Romeo, Fiat, Jeep and Abarth for an exclusive look at what the future holds for the company.