The Compass is a competent crossover but it's hampered by its limited practicality and VW-derived diesel engine. 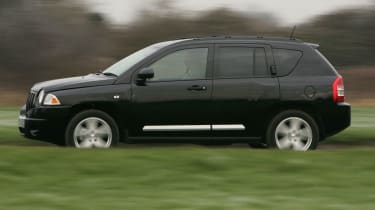 The Compass is a competent addition to the crossover breed, but it's hampered by its limited practicality and VW-derived diesel engine. And that's before you consider the ungainly looks and a cabin that's second-rate in terms of material quality and design. At £19,010, this model doesn't come cheap, either. And with the less expensive - and more rugged - Patriot just round the corner, the Compass could struggle to win over buyers.

Whatever you think about the styling, the new Jeep Compass certainly stands out from the crowd.

Everywhere you look on the road-biased 4x4 - from the distinctive seven-slot grille to the round headlamps and sharp rear - it's clear designers have worked to give the small car a new direction. Yet we just can't help thinking this Jeep 'Lite' - the firm's first-ever hatchback - won't exactly have traditional buyers flocking to dealers.

Luckily for Jeep, the Compass will be joined by another new SUV later this summer: the cheaper and more rugged Patriot. As such, the Compass is the upmarket option, and is aimed at conventional compact family hatches - so, on that basis, it's a pity the cabin comes as such a disappointment.

Climb aboard and the angular dash and cheap plastics give the interior a dated look and feel. The absence of reach adjustment for the steering wheel is further evidence of cost-cutting, although there's plenty of space and build quality is solid.

The elevated driving position provides good visibility, but this is compromised by thick A-pillars at the front and wide C-pillars at the back. Still, there's lots of rear legroom, and the generous 436-litre boot capacity should also appeal to family buyers. Drop the split-folding rear seats and you get a flat load bay floor with a maximum space of 1,277 litres.

Out on the road, the VW-derived diesel engine is a sensible bet thanks to its combination of performance and economy - although this model commands a significant £1,015 premium over the 2.4-litre petrol variant. The oil-burner is vocal when worked hard, but refined at cruising speeds, and a competitive CO2 emissions output of 177g/km places the CRD Limited we drove in band E for road tax, which would mean an annual bill of £160.

Pitch it into a bend and there is plenty of body roll, but the Compass is good to drive thanks to its accurate steering and supple suspension, which soaks up bumps and ruts. The newcomer is also well equipped, with ESP stability control alongside selectable four-wheel drive for off-road duties.

But few buyers are likely to use the Compass as a 4x4 - and if that's the case, the controversial looks and low-rent cabin could limit its appeal.