Jeep is aiming high with its latest Compass SUV, but can it topple the best cars in its class? 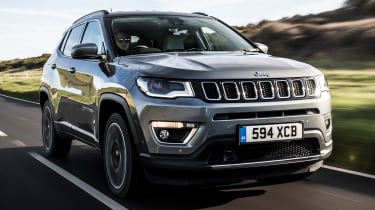 It’s clear from the off that the new Jeep Compass is a far more competitive car than the last model, mixing a distinctive design with a solid interior, loads of kit and the brand’s trademark off-road ability. The 1.6-litre diesel is a decent all-rounder, too. But the crossover market is at saturation point, and unfortunately the Compass' drive lacks polish when compared to its closest rivals. It's not all that practical, either.

Jeep has enjoyed extensive growth in Europe over the last few years, moving from around 300,000 sales in 2009 to nearly 1.4 million in 2016. That success looks set to continue, too, with cars like the all-new Compass vying for market share against some seriously established segment giants.

Those who recognise the Compass name may remember the last model, which went on sale back in 2011. It lasted a mere three years before slow sales forced the axe to fall on its head. Jeep has higher hopes for the new model, and rightly so, with an extended platform borrowed from the smaller Renegade, a distinctive new look and tech that makes the old car seem like a distant memory.

Design is always subjective, but it’s also a crucial aspect of a Jeep’s rugged appeal. All the basics are there, with an upright front-end, the trademark seven-slot grille and trapezoidal wheelarches giving it plenty of macho kudos. Some bright colour combinations give it personality, too, although the design won't be to all tastes. 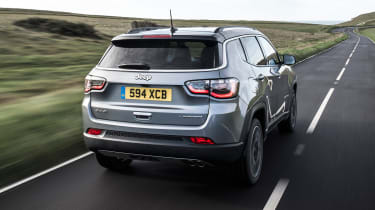 While the outside is a welcome departure from the family crossover norm, the interior is a bit of a disappointment. Quality is acceptable enough; aside from a pair of really cheap-feeling column stalks there’s enough high-grade, soft touch materials and a reasonably solid feel. It’s no Volkswagen Tiguan, but it’s far nicer to sit in than before.

It’s just a pity that there’s little of the colour and personality found in the cheaper Renegade – very few of that car’s funky ‘easter egg’ details have transferred to the bigger Compass SUV, and it’s all a bit dark and characterless. The seats are flat and fairly unsupportive, too, while rear visiblity is pretty woeful thanks to those thick C-pillars. A rear-view camera is only standard on Limited spec and above, too.

Still, the updated 8.4-inch ‘Uconnect’ touchscreen in our test car is fitted to all but the base models, and it’s large, clear and responsive, with plenty of features including Android Auto and Apple Carplay. It’s a bit of a busy design, though, with a mass of menus to navigate through. Strangely, there’s physical buttons for the climate control alongside a menu in the screen that does the same job, but the former is easiest to use on the move.

The Compass comes with a raft of safety tech installed, though, contributing to the car’s excellent five star Euro NCAP rating – the old model only managed two stars from an easier test regime.

Practicality is very much a mixed bag. The Compass has 7cm added to the wheelbase compared to the B-segment Renegade, and that has a big benefit on rear-seat legroom. Average-sized adults won’t find their knees touching the seatbacks, but we’d avoid the panoramic sunroof, which – despite Jeep’s claims to the contrary – means rear headroom is quite tight.

The 438-litre boot is unremarkable, too – a Tiguan (which Jeep considers the closest competitor to the Compass) adds nearly 180 litres to that with the rear seats in place. 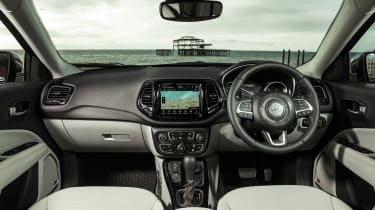 We’re testing the 1.6-litre diesel, which is forecasted to be more popular than the 2.0-litre despite only being available in two-wheel drive form. Interestingly, Jeep reckons that for the first time, a petrol variant – specifically the base 138bhp model – will be the biggest seller, though that wasn’t available to try.

The base diesel feels sprightlier than you’d expect, though, with strong enough performance for most needs and better refinement than the coarse 2.0-litre. A claimed 64mpg is impressive, too. It still gets raucous above 3,000rpm, however, while there’s more vibration through the controls than in the best crossover rivals. Once up to a cruise, it’s wind and road noise that are the dominant intrusions.

The Compass handles better than you might expect given Jeep’s traditional off-road bias. It stays reasonably flat and level in the bends, and while the steering is on the light side it’s at least accurate and quick. It feels grippy and controlled in most conditions, but the ride lets the side down a bit. For all Jeep’s talk of a new ‘frequency selective’ damping system, it seems to fidget about on a typical A-road more than rivals, and while the soft setup means it deals with large bumps effectively, sharp potholes can unsettle it around town. With Jeep also citing premium cars such as the BMW X1 as competitors, we expected a more sophisticated drive.

Where we expect the Compass to have an advantage over crossover rivals is off-road, with lots of talk from Jeep executives about ground clearance and axle articulation. Of course, that will only apply to 4x4 versions, and whether that justifies the price is another question. Our (albeit generously equipped) Limited-spec model is pricier than a top-spec Peugeot 3008, but undercuts the equivalent Volkswagen Tiguan – though with strong predicted residual values, Jeep’s UK boss promises finance deals will be competitive.