Jeep has high hopes for the new Compass as it targets the booming compact SUV segment but are they justified? 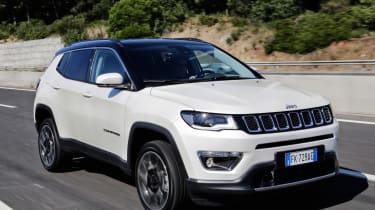 The Jeep Compass enters a very crowded class, and always had its work cut out to beat the likes of Peugeot’s 3008 and SEAT’s Ateca at their own game. Despite this, it has the potential to find many happy buyers, on account of its handsome looks, practical interior and the off-road kudos of the Jeep badge. This high-spec 2.0-litre diesel with an auto gearbox isn’t the one to go for, but in the right spec at the right price, the Compass could actually compete with the Nissan Qashqai and VW Tiguan on the compact SUV segment’s second tier, below our class leaders.

The compact SUV segment - one that includes cars such as the SEAT Ateca and Peugeot 3008 - is one of the most important in Europe, growing faster than any other class of car. Now it’s Jeep’s turn to get in on the action with its new Compass.

The Compass is a little bigger than a Jeep Renegade but a little smaller than a Cherokee, placing it up against some seriously impressive rivals. For a company that only makes SUVs, Jeep is a bit late to produce a model directly targeting this profitable sector. The previous generation Compass launched way back in 2006 and was well behind the curve by the time it disappeared from UK showrooms in 2015, so a lot is riding on this car as it attempts to beat the established competition.

• Best SUVs to by now

We’ve had the chance to get an early drive in the European-spec version of the car in Portugal. The UK model doesn’t come out until early next year, but first impressions of the brand’s new family car are pretty good. 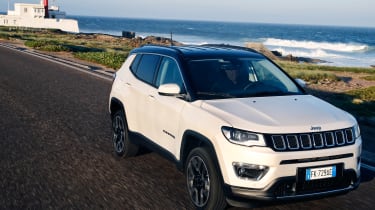 It certainly stands out in terms of design - the bold shapes, distinctive seven-slot grille and chunky wheel arches mean it looks more like a proper SUV than most of its rivals - and the Jeep badge certainly adds some kudos among fans of off-roading.

A choice of several bright paint colours is good to see, as they suit the Compass’ funky looks. Sharp LED headlights and a black roof help to make the car look lower and wider as well - in fact it’s one of the best-looking cars in its class.

Sadly that’s not the same for the interior. There are lots of soft-touch plastics on the dash, but they’re all black and dull-looking. While the Peugeot 3008 has some beautiful materials of contrasting textures around the cabin, here there are just a few bits of (fingerprint-magnet) black gloss plastic.

It’s all a bit characterless - the chunky steering wheel and quality seats are the only real highlights. Our top-spec Limited model will be pretty expensive when it arrives in the UK, and can’t match similarly-specced rivals for cabin quality - but we don’t know the final prices yet.

The high-spec Limited gets an 8.4-inch touchscreen sat-nav system with Apple CarPlay and Android Auto. It’s more responsive than the system in a Nissan Qashqai, but about on a par with the one in the 3008 - being just as fiddly to use. That’s mainly because there are no physical buttons to help you jump quickly between screens.

Unlike in the Peugeot, however, you do get physical buttons for the air-conditioning - we’re glad to see these still included. Lower trim levels will get a smaller five- or seven-inch screen, which we expect will look very small on the dash - even the larger system looks oddly small on the Compass’ big, wide dashboard.

You also get a seven-inch screen in between the dials that can display driving data and sat-nav directions. It’s not as good as the 3008’s full digital instrument display, but we do appreciate having real dials and it’s something some buyers will prefer. 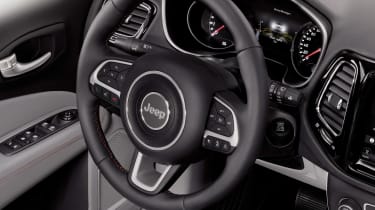 There’s lots of space inside the cabin - you won’t want for shoulder room and adults will easily fit in the back seats, even behind a tall driver. It feels a bit dark back there, but that’s the same as any car with a similar sporty roofline.

A large, flat load bay in the boot, along with a versatile boot floor, means the Compass scores well for practicality. However, the 438-litre boot isn’t as spacious as the 3008’s 520-litre area.

The rubber floor mats in our test car hinted at one of the Jeep’s real talents. Unlike most of the cars it goes up against, it’s actually a genuinely capable off-roader designed for much tougher terrain than buyers will probably ever take it over. 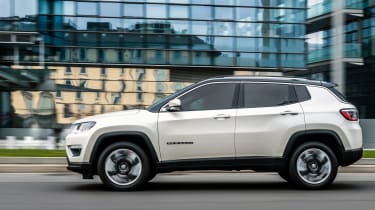 Entry-level cars are front-wheel drive only, but our Compass was a 4x4 model - and it’s been set-up to tackle anything you can throw at it. The system stays in auto mode most of the time, but there are settings for mud, snow and sand as well.

The small amount of off-road driving we tried didn’t faze the Compass at all - but if it’s anything like as good as the small-but-mighty Renegade it shares a platform with, the Compass should be up there with the best in class when you head off the tarmac. There’s an even more off-road focused Compass Trailhawk version, which sits at the top of the range and features extra body cladding, higher ground clearance, a low-range gearbox and steeper approach angles.

Most buyers will spend much more of their time on the road, however, and the Jeep does feel a little compromised here. Smooth Portuguese roads mean it’s hard to tell exactly how the Compass will fare in the UK, but it felt about as composed as a 3008 or Ateca - if less fun to drive. 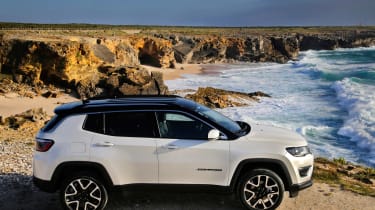 The steering weight is decent, but there’s no feedback through to your fingers and there’s a lot of body roll if you enter a corner quickly. It starts to feel unsettled at speeds where a SEAT Ateca would not, but it’s only a little way behind some of the more comfort-focused rivals such as the VW Tiguan.

The Jeep Compass also not helped by the slow nine-speed automatic gearbox. It’s not too bad at deciding which gear to be in, but changes are really noticeable. At any speed it seems to drop into gear with a thud. The transmission also feels set-up for off-roading rather than town driving, as it holds on to first and second gear a bit longer than you expect it to.

That’s not great when the engine is as coarse as the 2.0-litre diesel in our test car. It’s got 380Nm of torque and 168bhp, so there’s plenty of power, but rev it even a little and there’s a very unpleasant diesel rattle. It’s rougher and noisier than pretty much all of its diesel rivals.

We suspect that with a manual gearbox and in a cheaper trim level - there will be alower-powered 2.0-litre diesel, as well as a 1.6 MultiJet diesel and a 1.4-litre petrol with 138bhp - the Jeep Compass will find a market of real fans. It’s handsome, great off-road and has loads of space inside, giving it more personality than some of the more sensible small SUVs on the market at the moment.