The Jeep Compass is a worthy entry in the SUV market, but it isn’t as refined or dynamic as the class leaders 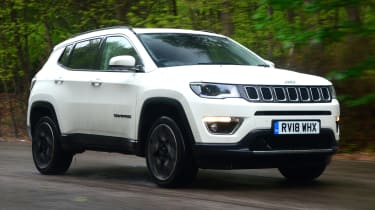 The Compass is a worthy entry to the family SUV class, but it's a cut-throat market and Jeep's offering isn't refined or dynamically capable enough to really threaten the likes of the Nissan Qashqai, Skoda Karoq or Peugeot 3008. Cheaper, front-wheel-drive versions may yet have more appeal - but this 4x4 edition's main draw is off-road ability that few will really require. And that means it isn't likely to be any more than a niche option in the UK.

Jeep remains a left-field choice in Europe, where its rugged image hasn't quite hooked up with buyers in the market for SUVs that will be used predominantly on roads instead of in the wild. But the company is chipping away at new offerings all the time, and now British customers looking for a family-sized SUV have the option of this: the new Jeep Compass. We were reasonably encouraged by our first experience of the car last year, and now we've had a chance to try it on UK roads.

The Compass is 4.4 metres long, so it's squaring up to some serious competition in the heart of the market. Everything from the Nissan Qashqai and Skoda Karoq to the Peugeot 3008 and Volkswagen Tiguan could be considered a rival. And as with the competition, the Compass is available in a wide variety of configurations. The range starts with front-wheel-drive, six-speed manual editions, equipped with either a 1.6-litre MultiJet diesel or a 1.4-litre MultiAir turbo petrol. If you want four-wheel drive and a manual gearbox then you'll need to go for the 138bhp 2.0-litre diesel. But there are also a couple of high-power nine-speed automatic 4x4s in the line-up.

There are four trim levels, starting with Sport, which gets 16-inch alloys, air conditioning and cruise control, a leather steering wheel and forward collision warning. Step up to Longitude and you'll get 17-inch alloys, plus front fog lights, a reversing camera, an 8.4-inch infotainment display with Apple CarPlay and Android Auto connectivity, dual-zone climate control, and keyless entry and go. 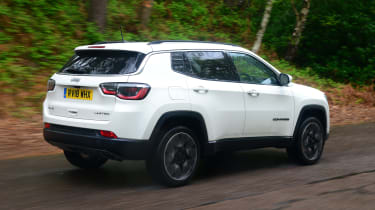 Limited beefs the wheel size up again, to 18 inches, and brings in heated electric leather seats, a heated steering wheel, rain-sensitive wipers, blind spot detection and park assistance that can work in parallel and perpendicular scenarios.

The range-topping Trailhawk version is due this summer and is designed for more regular off-road use. It’s available only with the nine-speed auto and four-wheel drive and includes halogen projector headlights, different front and rear bumpers, a raised ride height and more rugged floor mats. Significantly, though, it takes the wheel size back down to 17 inches and features a low-speed mode that includes hill descent functionality for more extreme conditions.

Here we're trying the Limited 2.0-litre diesel, with the manual box and front-wheel drive. On paper it looks like an expensive buy (at £31,495), but it's worth remembering that it is four-wheel drive; ask your Nissan dealer for a diesel Qashqai with all-wheel drive and you'll probably be pointed in the direction of the £30,730 1.6 dCi Tekna. So the Compass is at least in the ballpark on price.

Sadly, it's not quite there on dynamics. The engine starts with an old-school judder, leaving you in no doubt that it's a diesel. And while it does calm down once it's warmed up, you're likely to notice it again during stop-start traffic; pulling away in particular seems to be the cue for a chorus of chirping from under the bonnet.

The MultiJet has a useful 350Nm of torque, delivered at 1,750rpm, but the power band still feels unusually narrow for this size of diesel engine. Jeep says the peak power is at 3,750rpm but the motor feels done and dusted long before that; you'll be shifting up by 2,500rpm, basically. Fortunately the gearbox is reasonably slick, allowing you to make brisk progress as long as you're prepared for plenty of shifts. 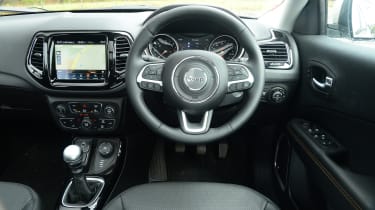 The refinement does improve when you're up to speed and cruising - although by this point, the limits of the Compass's chassis may well have become evident. The suspension set-up feels soft, allowing a fair amount of body roll if you stay committed through corners. The steering feels a little over-assisted too, so it needs a measured approach to prevent things getting out of shape.

This wouldn't be an issue if the car delivered a cosseting ride, but the Compass's composure is too easily shaken by imperfections in the road surface - particularly sharp bridge expansion joints and shallow potholes. The overall impression is of a car whose ride is too brittle for British roads – it’s less composed than the Qashqai without offering the cornering ability of a SEAT Ateca.

Inside, the cabin has soft-touch materials in all the right places - although the design itself is rather busy. This is particularly evident around the base of the centre dash, which is strewn with buttons. At least they include physical heating and ventilation controls, unlike the screen-based systems in some of the car's rivals. Speaking of which, the central infotainment display is mounted high up, so it's close to your eyeline, and the display itself is crisp and clear. The system feels pretty nifty to respond to inputs, too.

There's solid legroom for six-footers in the rear seats - although the panoramic sunroof does cut into headroom a little. But while the boot has a variable-height floor, the maximum capacity on offer is 438 litres. That's a little more than a Qashqai but well down on the likes of the Skoda Karoq.