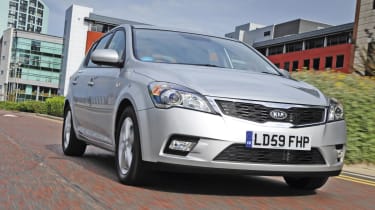 It’s better late than never for the Kia EcoDynamics brand. But the greenest Cee’d in the revised range is a well executed car that doesn’t sacrifice driving pleasure in the pursuit of better fuel economy and emissions. The facelift has freshened things up inside and out. Add stop-start, as well as revised suspension for a more refined ride, and it’s a strong choice.

Bosses at Kia are planting the Cee’ds of change! This is the first model to wear the new EcoDynamics badge – a green sub-brand that will eventually include hybrids, electric cars and even fuel cell vehicles.

The EcoDynamics hatch is powered by the 1.6-litre diesel, and for the first time gets ISG stop-start – technology Kia hopes to have fitted to 85 per cent of its cars by 2014. Low-rolling-resistance tyres and a new six-speed manual gearbox complete the modifications.

Besides the EcoDynamics bootlid badge, the newcomer looks identical to the rest of the revised range. So it gets the fresh nose and LED-effect tail-lights. Inside, a new centre console and aluminium trim improve things.

The 89bhp oil-burner feels flexible, and the stop-start cuts in unobtrusively in town and fires the diesel when you touch the clutch. Plus, the steering is weighty and the gearbox slick.

Kia offers the EcoDynamics in mid-range Cee’d 2 spec only, and charges more than for the regular car – the £14,195 price is the same as for the higher-powered 113bhp diesel. But the big fuel savings mean you’ll soon recoup that extra outlay.

Rival: Focus ECOnetic Due for replacement at the end of 2010, the Ford leads the way with its sparkling handling and sharp styling. It’s pricier than the equivalent Cee’d, though.