Kia’s updated Cee’d is late to the three-cylinder engine party, but has it caught up with Vauxhall’s new Astra and Citroen’s C4? 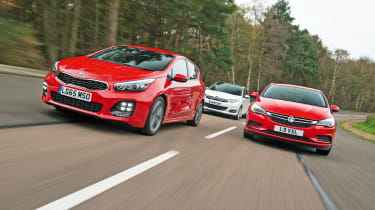 In the past, small-capacity three-cylinder turbo petrol engines would normally have been associated with some rather quirky little Japanese cars. But to meet ever-lower emissions targets, car makers are turning to them to boost efficiency without sacrificing performance. And Kia has just joined the fray.

It has introduced a 1.0-litre three-cylinder turbo unit with the updated Cee’d range. It comes in two outputs, and it’s the more potent 118bhp version we test here in GT-Line trim.

For this first test, we’ve lined up two very different three-cylinder rivals. The new Vauxhall Astra is our current compact hatch champ, and is now offered with the three-cylinder turbo that debuted in the Corsa last year. A revised pricing structure means the top-spec Elite Nav model is closely matched to the Cee’d GT Line on price. 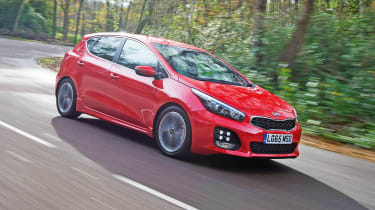 A car that beats both for value is the Citroen C4. It comes with a 1.2-litre three-cylinder, and the top-spec Flair model is well equipped.

So, does adding a small-capacity turbo to the Cee’d make sense? And more importantly, does it have the measure of its rivals here?

Vauxhall’s OnStar system puts you in touch with a call centre to assist you. It can unlock your car if you manage to trap your keys inside, and can automatically call the emergency services if you’re involved in an accident.

Citroen’s SOS system adds an emergency button that you can press to send your car’s location to the emergency services.

Both the Astra and C4 have clapperboard-style wipers that sweep from the base of the windscreen and up to either side. 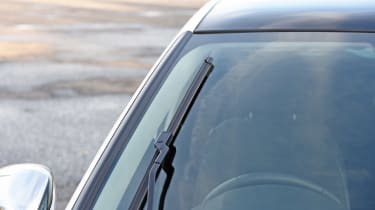 But the Citroen’s leave a large strip of the screen unswept on the driver’s side, which limits visibility. It’s a small niggle, but can be frustrating on wet days. 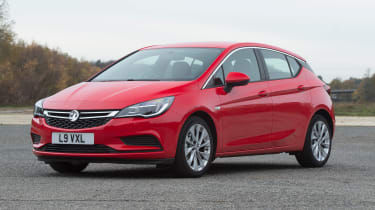 It’s another victory for our class favourite, the Vauxhall Astra. The 1.0 turbo isn’t the fastest engine around, but it’s quick enough, and the lack of a six-speed gearbox isn’t a hindrance to its performance. The Astra handles tidily, is well equipped and is comfortable, too, while Vauxhall’s new pricing strategy pushes the newcomer to the top of the class. 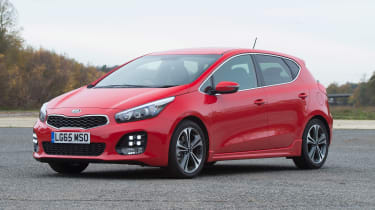 Kia’s first small-capacity turbo engine is a good effort, and its rev-happy nature suits the sporty character of this GT-Line model well. This version looks smart, is well equipped and is enjoyable to drive in most situations. However, Kia needs to do a bit more to reduce the car’s emissions and engine noise to put this three-cylinder model at the front of the compact hatch pack. 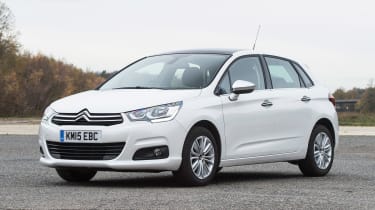 The C4 is being left behind by newer and more accomplished rivals, even within Citroen’s own ranks. While the C4 is comfortable, fast and decent value, the driving experience falls well short of the other cars here. Add in poor economy and steep depreciation, and it makes the C4 hard to recommend to even the most dedicated Citroen fan. We’d have a C4 Cactus every time. 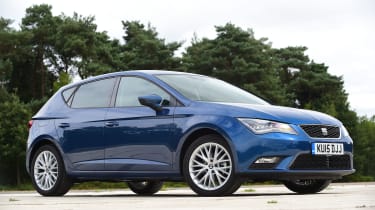 SEAT’s Leon is still a class favourite, thanks to its sharp looks, practicality and handling. Its 1.2 four-cylinder is smoother than its rivals here, while the Tech Pack adds LED headlights and sat-nav for £1,200 less than the Astra. 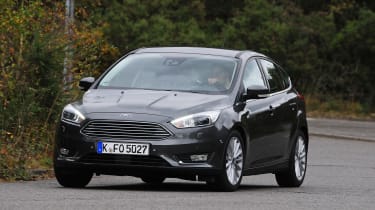 The lower-powered EcoBoost engine makes do with a five-speed gearbox, but emissions of 105g/km mean the Focus is a better company car choice than the Cee’d. Titanium spec adds lots of kit, and it’s more fun to drive than the Kia.