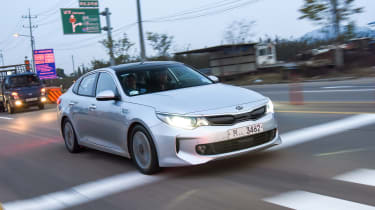 It’s not only hybrid technology in the new Niro crossover that Kia is investing in. The brand is looking at plug-in and alternative fuels in other models. Next year, the new diesel-only Optima will be boosted by the addition of a plug-in hybrid to the line-up.

The Optima PHEV mixes a 2.0-litre four-cylinder petrol engine with a 50kW electric motor and a six-speed automatic gearbox. Charging should take under three hours, and the PHEV will offer a 27-mile electric-only range and around 119mpg.

To make it stand out from the diesel model, the PHEV gets different headlamps, a special grille with opening and closing vents, different front and rear bumpers and plug-in badges on the front wings. 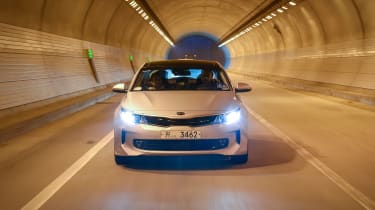 Auto Express went to Korea to sample a prototype version of the saloon, and the powertrain was remarkably quiet when running in full electric mode at speeds of 50mph. The steering is well-weighted but doesn’t offer a large amount of feedback, and just like the new Optima diesel the cabin is a big step up from its predecessor in terms of quality and layout.

Owners should be able to get 27 miles of pure electric range from the Optima PHEV, and just like other plug-in hybrids like the Mitsubishi Outlander PHEV, the Optima can save battery range or even use the 2.0-litre petrol engine to charge up the batteries on the move. A switch next to the gearlever offers different driving modes including the battery save and charge functions.

Other markets around the world will have a Optima Hybrid model too, but in the UK there will only be the choice of diesel or plug-in hybrid powertrains. Kia is aiming to double current Optima sales of around 1,500 units a year to 3,000 cars with the PHEV. 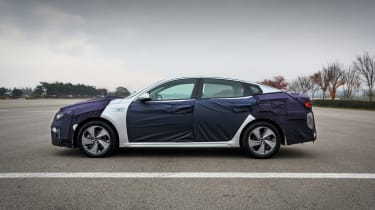 As for prices, a spokesman told us there is an understanding within Kia to make the car as popular as possible, hinting that the PHEV could cost around the same price as the diesel models (from around £27,000) or even the same just like Mitsubishi’s pricing structure with its Outlander PHEV.

With the new Niro hybrid crossover and the Optima PHEV, it’s clear Kia isn’t investing in just one ‘green’ technology. The firm told Auto Express is it taking a holistic approach for future technology and that includes diesel power too. And just like sister firm Hyundai, Kia is exploring fuel-cell technology and aims to have a model on sale in 2020.

Just like the Toyota Mirai and Honda FCV Clarity, the Kia FCEV will be a distinctively styled separate model. Kia hopes to sell 1,000 a year globally as more markets open up to hydrogen motoring.

Are you a PHEV fan? let us know why below...