The hydrogen-powered Honda Clarity has already wowed us, but is it a hit on British roads? 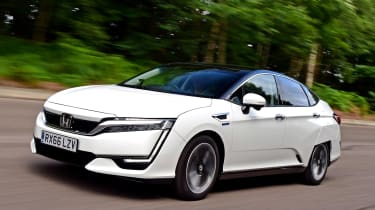 Fuel-cell vehicles aren’t for everyone – yet – but the Clarity is further proof of how far manufacturers have come in squeezing the tech into regular cars. Honda’s offering is a spacious family car that’s also a relaxing cruiser. True, the boot space is compromised, but a bigger problem is that the main flaw in the package – the refuelling infrastructure – isn’t something that Honda can do much about.

We were pretty impressed when we tried the Honda Clarity fuel-cell car in Denmark back in the spring. Now the first car has landed on UK shores – one of a handful of examples that will end up on the driveways of leasing customers.

‘Customers’ is a bit strong, because unlike the fuel-cell Toyota Mirai, technically this car isn’t on sale in the UK at all. We won’t get a Clarity until the successor to this car arrives – in around 2022.

The Clarity’s fuel-cell stack runs off hydrogen, mixing the fuel with oxygen from the air to produce electricity that fills the batteries powering the front wheels. Water is the only emission as the car moves along. 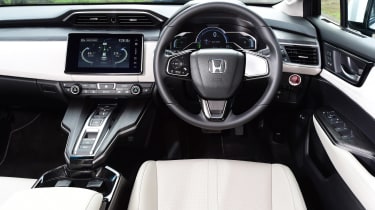 The advantage of this, of course, is you can have emissions-free motoring without having to wait for charging. The 700-bar tank is easy to fill – about as simple as your regular visit to the petrol or diesel pump, in fact.

This convenience is theoretical, though, because there are still only about a dozen hydrogen fuelling points in the UK. So you’ll end up watching the predicted fuel range carefully; Honda claims 403 miles, but in truth it’s less than 300 in real-world use.

On UK roads, the Clarity drives like many other electric vehicles; the initial power delivery from the 174bhp/300Nm motor is strong and smooth, and while there’s a little bit of whine, it’s quickly drowned out by wind noise from around the mirrors.

The Clarity isn’t particularly agile or involving, but the suspension does a good enough job of dialling out British road imperfections. Also impressive is the brake pedal modulation, given how many EVs find it hard to manage the transition between stopping power and energy recuperation.

The rest of the package is conventional enough; the Clarity is a big five-seater whose looks are distinctive enough to let people know that you’ve thought long and hard about the environment when choosing your powertrain. The boot will confirm this, because it’s badly compromised by the hydrogen tank, and has a big step in its floor that loose items are all but certain to slide off.

The cabin, meanwhile, is nicely finished, with a mix of high-quality materials, including a synthetic suede that gives a strip of luxury across the centre of the facia. It’s a sign, if anything, of how this car has been produced – not to make a profit, but rather to showcase Honda’s technology progress, and help gain further acceptance for fuel-cell vehicles. 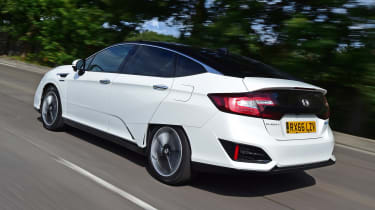 Click on the gallery above to see more of the Honda Clarity...