With sleek styling and punchy engines, the Kia Pro_Cee'd is a sporty but affordable choice 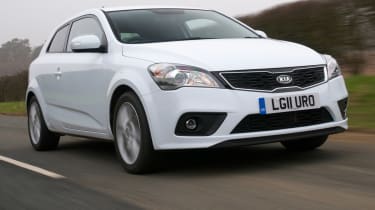 The Pro_cee'd is a Kia you can buy with your heart as well as your head. Its three-door body sacrifices some practicality, but gains in kerbside appeal and a sportier driving experience. Introduced in 2008 and facelifted in 2011, it's now recogniseable as part of the new Kia family and can compete with rivals like the Renault Megane Coupe and VW Golf 3dr. A seven-year warranty and a growing reputation for reliability means the Pro_cee'd is an attractive choice for buyers on a budget.

To justify the sportier image, the Kia Pro_Cee'd's suspension is firmer than on the five-door which improves body control in the corners, but means the car becomes uncomfortable on broken surfaces. The steering too has been given more weight, which seems at odds with the light pedals and gearshift action. It can't match the class-leaders for refinement, but the range-topping 126bhp 1.6 CRDi engine delivers strong in gear acceleration.

As with all Kias, the Pro_Cee'd is keenly priced - at around £2,000 less than the equivalent VW Golf. Factor in low insurance costs and Kia's seven-year warranty and it should cost very little to run. Our recommendation, the top-spec 1.6 CRDi returns fuel economy of 62.8mpg and CO2 emissions of 119g/km, although an 89bhp EcoDynamics version ups that to 67.3mpg and 103g/km. By comparison, the 124bhp 1.6-litre petrol model returns 46.3mpg and 146g/km. Top-spec post-facelift models get a colour sat-nav screen integrated into the dash, which doubles up as a display for the reversing camera, while a USB port and air-con is standard on all models.

A 2011 facelift brought the Kia Pro_Cee'd a new grille, borrowed from the Sportage crosover, black surrounds for the headlights and indicators moved from the front wings to the wing mirrors for a cleaner look. From the base of the steeply-raked windscreen back, it's entirely different from the five-door Cee'd. A 30mm drop in ride height and a rising belt line give it a more dynamic stance on the road. Considering the wholsale changes on the outside, it's a shame that the interior is identical to the five-door.

Compared to rivals, the Kia Pro_Cee'd's driving position is set a little too high. That detracts from the Pro_Cee'd sporty nature, but the three-door is just as roomy as the standard car. The doors open wide to aid access to the back seats, but once you're there, the cabin feels rather claustrophobic, due to the small side windows. Boot space is the same as the five-door at 340 litres, although the maximum with the back seats folded is 1,210 litres, which is 90 litres down on the five-door.

Build quality is excellent, and materials are almost on a par with the VW Golf. Considering the five-door Cee'd placed 22nd for reliability in our 2011 Driver Power survey, there's no reason to think the Pro_Cee'd will be anything other than dependable. The five-door also scored five stars for adult protection and four stars for child protection in its Euro NCAP crash test - and all the structural elements that made that car so safe, as well as the electronic aids, have been included on the three-door.