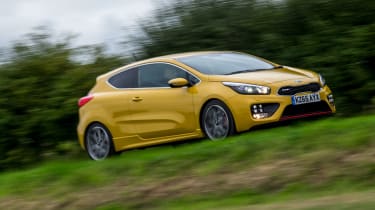 The Kia Pro_cee'd GT isn’t designed to rival cars like the Volkswagen Golf GTI or Renaultsport Megane. Instead, it launched in 2013 as more of a ‘warm’ than ‘hot’ hatchback, offering buyers a sportier version of the standard Cee’d, but without the sky-high bills associated with modern-day performance cars.

However, with combined fuel economy of less than 40mpg, and a list-price fast approaching that of its more-potent competitors, the Cee’d GT never really won the hearts of UK buyers. Potential owners were won over, however, by the car’s sleek looks, long kit list and extensive seven-year, 100,000-mile warranty.

As befits the pinnacle of the range, the GT gets a range of cosmetic and mechanical upgrades and is also the first to use the brand's 201bhp turbocharged 1.6-litre petrol engine. Designed, developed and built in Europe, it is available not only as a three-door Pro_Cee’d but also as a more-practical five-door, too.

Fitting a twin-scroll turbocharger to the normal 1.6-litre GDi petrol engine has boosted the power output by almost half and it now produces 201bhp and 265Nm of torque. Those figures put it some way behind the VW Golf GTI and Ford Focus ST but on a par with three-door rivals like the SEAT Leon FR and Peugeot 308 GT.

It sprints from 0-60mph in 7.3 seconds and runs to a top speed of 143mph. On the road it feels brisk, but without quite pinning you back in your seat like the best hot hatches around. An update in late 2015 brings peak torque in earlier at 1,500rpm (previously 1,750rpm) but you’d have to drive the two back-to-back to notice any real difference.

Other changes on the facelifted car include a special electric sound generator. Press the GT button on the steering wheel and a manipulaed sound is played through the car’s speakers under hard acceleration. Despite our reservations, it’s actually among the best we’ve tried. 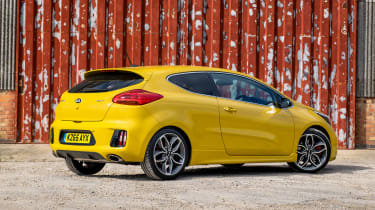 The Pro_cee'd GT gets stiffer springs and dampers, a thicker rear anti-roll bar and stickier tyres, meaning it’s infinitely better to drive than the standard car. It grips well through corners and body roll is well controlled but the brakes fade quickly and the weighty steering is a little inconsistent in feel around the straight ahead. It is not a match for the best hot hatches dynamically but the GT feels well suited to reasonably fast on-road driving rather than a track day special.

Early Cee’d GTs offered impressive value for money - with a prices starting from just a shade under £20,000. However, a 2015 update saw a £2,900 price hike meaning it no longer offers the rock-bottom value it once did.

The tweaks also removed the two trim levels (GT and GT Tech) in favour of just one – GT. The old GT model started at £19,995 and included pretty much all the kit you could possibly need, while the Tech model added luxury extras like xenon headlights, heated seats and a heated steering wheel, plus a seven-inch central touchscreen with sat-nav as standard. The new GT gets all this kit, but pushes the price above the entry-level Ford Focus ST.

It’s worth noting that while it’s still a reasonably priced car, you’ll pay the price at the pumps. Tuning the 1.6-litre engine has had a dramatic effect on fuel economy. Fuel economy stands at a claimed 38.2mpg, while CO2 emissions of 170g/km are not that competitive either. The fuel tank holds just 51 litres so expect to make regular fuel stops if you drive it hard.

Less power should mean though that the Kia is cheaper to insure than more extreme hatches, though.

One of the most important aspects for any three-door car is the way it looks., and the Pro_cee'd GT sets itself apart with a really striking exterior design. Details like the red pinstripe across the front splitter and honeycomb grille may have been pinched from better-known rivals, but the design is cohesive and strikes a good balance between sportiness and style. 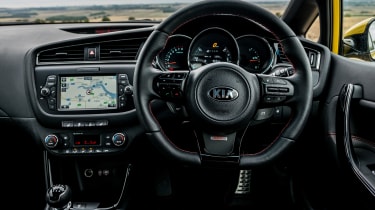 The quad-LED lights either side of the front grille and dual exhausts at the rear look great and, inside, the grippy Recaro sports seats are superb. The driving position is excellent and, apart from a small C-pillar blind spot, visibility is good too. The interior is well made and fun details like the 'GT' colour TFT display between the dials help it feel special from behind the wheel. Equipment levels are good and goodies like leather trim, brushed alloy pedals and Bluetooth are all standard fit.

For a svelte three-door there is a surprising amount of space inside the Pro_cee'd GT. The rear bench is wide enough to seat three adults in relative comfort and a flat floor means there is a lot of legroom as well. The big glovebox and other cubbies mean storing loose items is simple and the boot will swallow an impressive 380 litres of luggage.

If you need more room, the back seats split 60:40 and, although the loading lip is higher than the five-door model, it is easy enough to lug heavy items on board. Access to the rear seats is reasonable and there is a button to slide the front seat forward to make it easy to climb inside.

All-round visibility is quite good for a sporty model and the suspension is soft enough to make long journeys stress free. Unwanted boom from the exhaust is kept to a minimum when cruising the motorway - unless you press the GT button, that is.

The Pro_cee'd GT comes with a seven-year manufacturer warranty as standard, giving you peace of mind for the first 100,000 miles of motoring as any major mechanical issues will be covered.

Although it is a high performance model, which uses a number of bespoke new parts, the standard range has proved reliable with no major recalls reported. We don’t expect the GT to fare any differently. If you drive hard, the GT will use its brakes and tyres faster than lesser models in the range, but the interior build quality feels robust and like it will stand the test of time well.

The Pro_cee'd is based on the Cee'd - which gets a full five-star crash safety rating from Euro NCAP. The Kia as a brand finished 19th in our 2015 Driver Power satisfaction survey – a drop from seventh in the previous year.