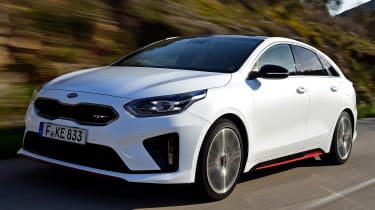 Is it a coupe? Is it an estate? No, it’s a shooting brake. The new Kia ProCeed is an interestingly styled range-topper for the ultra-conventional Ceed range. It’s good looking, well made, pretty practical and has its fair share of desirability. The warm GT model shouldn’t be viewed as anything other than being a warm grand tourer, because it’s no cut-price Mercedes-AMG CLA 45 - but that’s no bad thing

Kia has gone punctuation mad. First, it dropped the apostrophe for its Ceed hatchback and now for its sportier sister model, it’s not only dropped the rogue piece of punctuation but also the even more irritating underscore. The pro_cee’d becomes simply ProCeed and the Korean firm has performed a complete control-alt-delete on the car, as out goes the three-door body shape and in comes a swoopy five-door hatch design.

The ProCeed’s interesting mix of estate car and coupe body styles is an answer to the trend of people rejecting three-door hatchbacks. Here Kia is following Mercedes’ lead by offering a sleek CLA Shooting Brake in tandem with its more conventional A-Class, knowing that Shooting Brake customers are prepared to spend more cash on a more stylish model.

In our eyes it looks pretty good, with a clear nod to the CLA, although at the rear there’s a hint of Porsche Panamera if you squint hard. There are even a few interesting design details, such as the Porsche-like four ‘ice cube’ LED daytime running lights and metal-effect shark’s blade on the rear quarter glass carried over from the dramatic 2017 Proceed Concept. It’s just a shame then that the concept car’s large wheels haven’t transitioned over, because our car’s 18-inch alloys look a little lost within the body – but that’s the only real gripe. 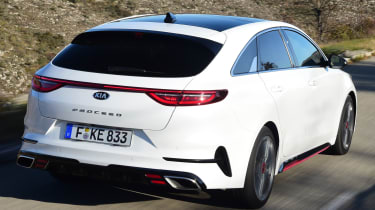 When it arrives in January the ProCeed is expected to come in three flavours of GT-Line, GT-Line S and GT – and our exclusive first drive was in a pre-production version of the range-topping model. Aggressive front and rear bumpers with dual exhausts, a black honeycomb grille with red inserts, red brake calipers and flashes of red along the sills give the GT a really sporting look, but even the entry-level GT-Line should get 17-inch alloys, those ice cube day-running lights, a rear spoiler and privacy glass. Prices should kick off from just under £24,000 rising to just over £28,000, making it pretty good value.

There are three engines – a 138bhp 1.4-litre turbo petrol with a six-speed manual or a seven-speed dual-clutch automatic, a 1.6-litre diesel with 134bhp and both transmissions, and a 1.6-litre turbo with 201bhp. The most potent unit is likely to be limited to GT and will probably only come with an auto in the UK. 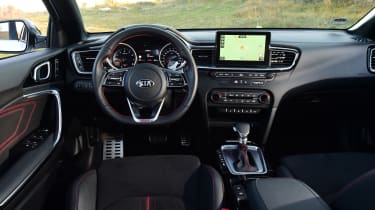 Kia’s upmarket desires are clear on the inside because the ProCeed, just like the Ceed hatch, is well put together, with swathes of plush plastics, while the GT adds red stitching and bolstered sports seats. But while kneeroom is good, headroom in the back is pretty tight – if you’re over six feet tall you’re really going to struggle – and the visibility out of the back isn’t great, either. That said, the boot is well shaped and offers useful underfloor storage, luggage rails and seats that nearly fold down completely flat.

The ProCeed sits 5mm lower than the Ceed hatch and estate, and features independent suspension all round, while the GT gets stiffer springs and softer anti-roll bars. It works, because there’s a nice mix of warm hatch and comfortable grand-tourer in the way the ProCeed GT tackles corners and bumps; there’s little body roll, loads of grip and the ride is firm but cushioned enough and never crashy.

The steering is particularly good in its response but just falls short of delivering enough feel, while the engine feels stronger and punchier than its 201bhp and 265Nm suggest. But the 1.6 turbo is let down by the automatic box; it might be a seven-speed dual-clutch, but the upshifts aren’t crisp enough for a sporting model and downshifts are too slow. This is mated to a throttle modulation that’s a bit tardy to pick up, too. 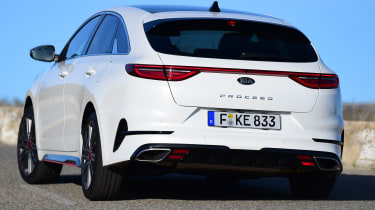 Kia has fitted a drive mode selector with just ‘normal’ and ‘sport’ modes – prod the button for the latter and the steering weights up and the throttle is a bit sharper (but not much) – but the big bonus here is extra engine noise. The GT gets a fruiter exhaust than other ProCeeds and even in ‘normal’ mode it’s nicely loud. ‘Sport’ opens up the exhaust flaps and pumps more noise into the cabin through a sound actuator; it’s good without being too tacky.

How the ProCeed drives on the road sums up the car, really. It’s a stylish, nicely made and slightly quirky car that handles and goes well but is slightly held back by its gearbox and throttle response. It’s a nice balance between a warm hatch and a GT wrapped up in one of Kia’s sexiest bodies.