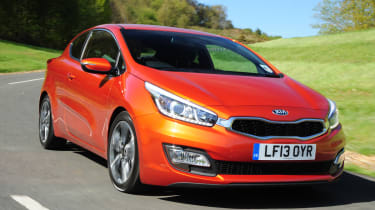 The Kia Pro_cee’d is essentially a three-door version of the Cee’d hatchback but the two cars look radically different when parked side-by-side. They share the same length (4,310mm), width (1,780mm) and wheelbase (2,650mm), but the Pro_cee’d sits 40mm lower and the B-pillar has been moved back by 220mm.

The side doors are 270mm longer than those at the front of the Cee’d, contributing to a more rakish profile. Throw in the rising beltline, low roofline and narrow glasshouse and you have the makings of a proper three-door coupe.

The higher-performance Pro_cee’d GT looks particularly menacing, thanks to its side sill mouldings, ‘ice cube’ LED daytime running lights and mesh grille. This model has its own review, which can be found here. 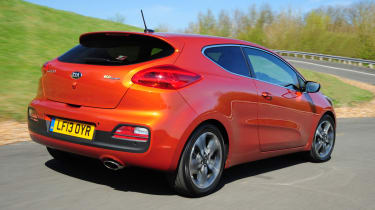 Three trim levels are available in the UK (excluding the GT), kicking off with the entry-level Pro_cee’d 2. Even in this lowly spec, the car gets 16-inch alloy wheels, LED rear lights, cruise control, a seven-inch touchscreen with mapping, Apple CarPlay and Android Auto, plus a reversing camera.

The Kia Pro_cee’d is a good value and comfortable contender in the three-door hatchback sector, with coupe-like design giving it a definite boost in the style stakes. There’s a good range of efficient engines, and while the handling doesn’t quite live up to the Pro_cee’d’s relatively racy image, it’s a comfortable and refined car to ride in.

Practicality is good, as long as you’re prepared for the compromises a three-door body style brings, and the car comes with reassuring safety and reliability credentials too.

A decent spread of engines offers a range of performance, but handling doesn’t live up to the sporty looks

Given its looks, you’d expect the Pro_cee’d to drive in a sporty, hard-riding way. In reality, though, it drives more like the regular Cee’d, with a supple, relatively soft ride that makes the car really comfortable on long journeys. This does mean plenty of roll in the bends, but it's reasonably well controlled. Add in nicely weighty but quite vague steering, and keen drivers may wish to look elsewhere.

Both the 1.6 petrol and diesel engines are smooth and quiet, and have enough power to accelerate the Pro_cee’d to 60mph in around 9.5 seconds. The manual gearbox isn’t the slickest, although the ratios are well spaced to make the best out of the available power. A dual-clutch gearbox is an option on the top-spec diesel model only. 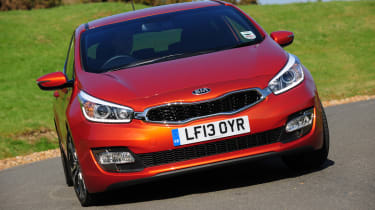 All models feature a fuel-saving stop-start system as standard. The 133bhp 1.6-litre petrol model returns a claimed average of 52.3mpg and emits 124g/km of CO2. The three-cylinder petrol fares better, delivering 57.6mph on the combined economy cycle and 115g/km of CO2. The diesel is more economical still, with a combined figure of up to 80.7mpg and emissions as low as 99g/km.

The spread of performance from the range of engines installed in the Kia Pro_cee’d is reflected in insurance group ratings from group 6 to group 14.

The Kia Pro_cee’d is relatively cheap to buy, but if you pick the right version it will hold onto a reasonable amount of value too. Used values experts CAP suggest three-year-old versions with 36,000 miles on the clock will be worth between 35 and 44 per cent of their new value – the entry-level 1.4 petrol, and diesel models do best.

The past decade or so has seen Kias evolve from some of the blandest-looking cars on the market to some of the most distinctive, and the Pro_cee'd is no exception. Although it’s the same size as the Cee’d - except for being 40mm lower - the Pro_cee’d has a better stance on the road. Clever tricks like wide-set front fog lights and a narrower grille make it seem wider and more aggressive, while the curves of the prominent tail-lights are similar to those of the VW Scirocco. The Pro_cee’d’s interior is more soberly designed than the exterior, but it features some attractive black and silver trim to break up the grey plastic that would otherwise dominate. 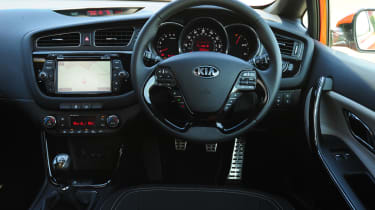 In spite of its more dynamic styling, the Pro_cee’d isn’t much less practical than the five-door version

Despite losing a set of doors, the Pro_cee’d isn’t a great deal less practical than the regular Cee’d. The front doors are 270mm longer than the Cee’d, making getting into the rear seats easy, although the size of the doors can be tricky in tight parking spaces.

Head and legroom is very impressive, even for adults. In the front, there’s plenty of space for driver and passenger, plus lots of cupholders and cubby holes, but things are a little cramped in the back. The slightly claustrophobic feeling isn't helped by small triangular rear windows that don't give rear-seat passengers much of a view out. 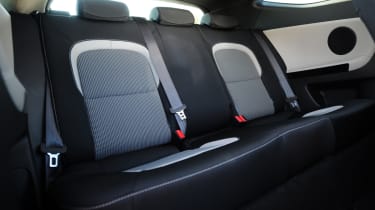 The tailgate is light and swings up easily. The boot lip is quite high and narrow, which makes loading a little tricky, but the boot is the same 380 litres as the five-door Cee’d. The seat backs fold flat to create a 1,225-litre space, although the lower roofline will limit the size of what can be carried.

The Pro_cee’d’s sister model has a five star safety rating, and good reliability credentials from the Driver Power survey

The Pro_cee’d and Cee’d are closely related, and both use the same engines and technology. The cars came sixth in our 2017 Driver Power customer satisfaction survey, driving away with the title of best compact family car. “Good-looking hatchback scores highly in almost every category,” we said when summarising the Cee’d and Pro_cee’d.

The five-door Cee’d was also crash tested by Euro NCAP in 2012, when it was awarded a full five-star rating. It’s reasonable to expect a similar crash performance from the three-door Pro_cee’d model.

As ever, the Pro_cee’d is covered by Kia’s fully transferable seven-year, 100,000-mile warranty, which has been extended to include seven years of map updates for the sat-nav on GT-Line models.

Fixed-price servicing plans are available from £300 covering three or five years of trips to the dealer, with all costs included. Service intervals are set at 20,000 miles or annual for the four-cylinder models, and 10,000 miles for the three-cylinders. 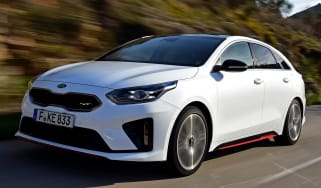 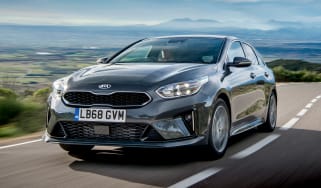 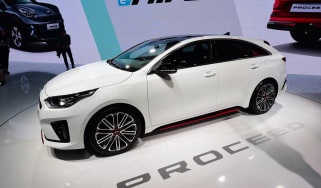 The Kia ProCeed trades a little practicality for a racy looks and spritely performance, with prices starting from just under £24k
New Kia ProCeed GT 2019 review 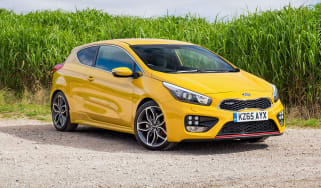 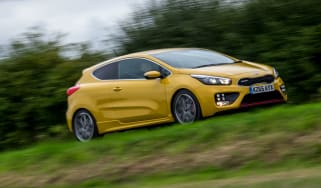 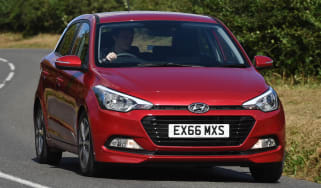 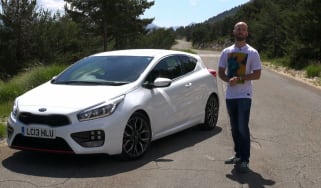 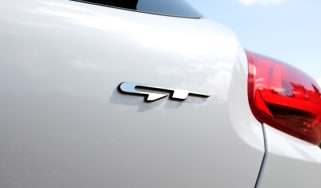 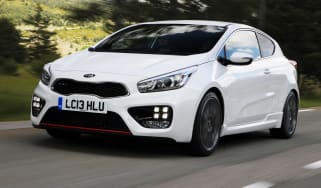 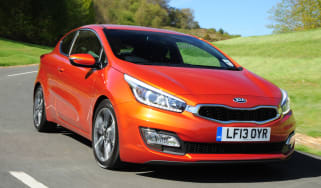 We get behind the wheel of the stylish three-door Kia Pro_cee'd to see if it impresses on UK roads
Kia Pro_cee’d 1.6 CRDi SE 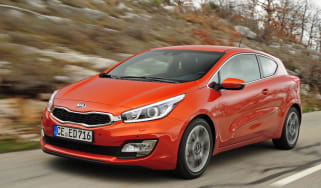 We get behind the wheel of the all-new, three-door Kia Pro_cee'd for the first time to deliver our verdict
Kia Pro_cee’d GT 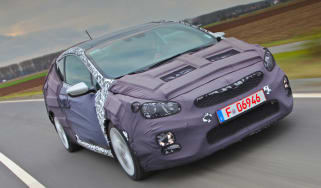 We drive a prototype version of the Kia Pro_cee’d GT, which will be the company’s first-ever hot hatch
Kia Pro_cee'd vs Renault Megane 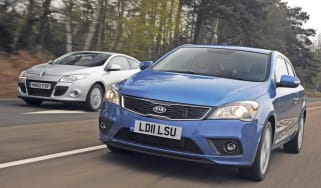 Facelifted Kia Pro_cee’d will sell on its style and efficiency. We see if it’s a better buy than attractive Renault rival
Kia Pro_cee'd 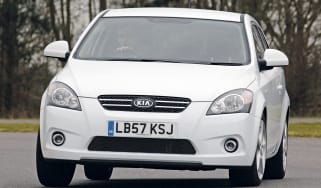 Final report: After 8,064 miles striking white three-door is leaving our fleet. Big question is, will we miss it?
Kia Pro_cee’d Sport 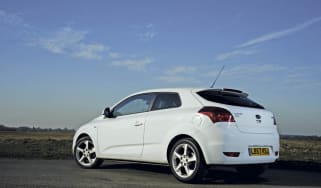 It’s been a hectic start to life for the Pro_cee’d as everyone on the team wants a piece of the action...
Kia Pro_cee’d 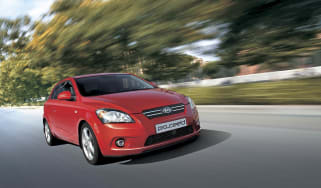 The looks of a hot hatch with the economy of a basic petrol engine...we drive the entry-level Pro_cee'd.
Kia Pro_cee'd review 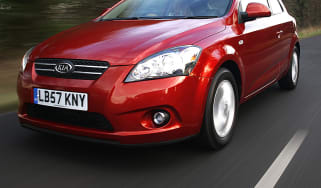 The Pro_cee’d isn’t quite the step forward we were expecting from Kia.
Kia Pro_cee’d 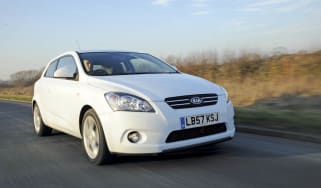 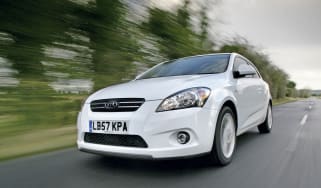 Can Kia's compact family hatchback be sporty as well as practical? We drive the three-door for the first time.
Kia Pro_cee'd (2008-2013) review 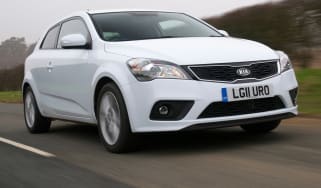 With sleek styling and punchy engines, the Kia Pro_Cee'd is a sporty but affordable choice
Skip to HeaderSkip to Content