It’s been a hectic start to life for the Pro_cee’d as everyone on the team wants a piece of the action... 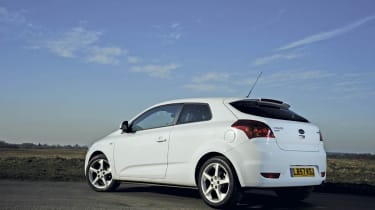 Sharing doesn’t come easy. Take the arrival of my current long-term test car at the beginning of the year. I was looking forward to getting hold of the keys of the Pro_cee’d Sport, in gleaming Arctic White. But it was not to be.

No sooner had the Kia been delivered to Auto Express HQ than the road test team had snaffled it for a whole two weeks!

As you can see from our main shot, road test editor Oliver Marriage was keen to get his hands on it, and it starred in a couple of tests, with plenty of miles piled on. When it finally returned, the bright white paintwork was filthy, and one of the wheels had been kerbed by a careless parker!

So, LB57 KSJ has worked hard from the minute it arrived, and it’s only now I’m enjoying getting behind the wheel. As it’s the Sport model, the Pro_cee’d is fitted with Kia’s 2.0-litre diesel engine, and it’s quite gutsy – although not as fast as you would expect, with 0-60mph taking 9.7 seconds.

It’s proving frugal, however, returning 41.5mpg, and easily keeps pace with motorway traffic. The only problem so far is that the handbrake is a bit loose, and needs adjusting. Getting this sorted by my local garage shouldn’t be a problem – by all accounts, visiting a Kia showroom is an enjoyable experience, as the firm finished in the top 10 in our Driver Power 2008 dealer survey.

Despite its sporty looks, the Pro_cee’d is proving practical. With the seats down, the boot is a spacious 1,300 litres – I can get my bike in the rear without having to take the front wheel off. There’s also a handy cargo net, which stops all my shopping spilling out after a trip to the supermarket. The side pockets by the back seats are proving useful, too.

Thankfully, despite the white exterior, the interior is dark, with black leather trim, which should allow it to stand up to plenty of wear, tear and spillages. In the meantime, I’m concentrating on keeping the distinctive bodywork looking as good as new.