The new Kia ProCeed has morphed into a sleek shooting brake estate, but is this 1.6 diesel the pick of the range? 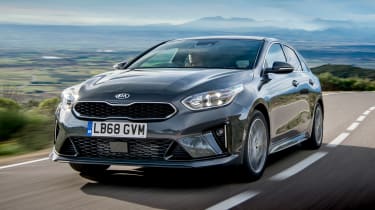 The ProCeed brings with it all of the other positives of the Kia Ceed, and wraps them up into a package which, at this price point, offers buyers something just a little bit different. It’s not quite at the top of its class for driving enjoyment or refinement, but impresses in both areas. This diesel option is smooth and frugal, too, and should suit high-mileage drivers down to the ground. If a Mercedes CLA Shooting Brake is out of budget, the Kia Proceed could be the ideal substitute.

This is the new Kia ProCeed: a name which, since it last appeared on the second generation of the Korean brand’s Ford Focus rival, has gone through something of a personality change.

The previous Pro_Cee’d wore a compact, three-door body style, placing itself as the most sporting model in the line-up. Now, however, the same name – minus some erroneous punctuation (it’s just ProCeed now) – sits on the boot lid of a shooting brake estate.

The ProCeed is only available in Kia’s top three trims – a move that helps to separate it from the standard Ceed Sportswagon. Prices start from £23,835 for a GT-Line car powered by a 138bhp 1.4-litre turbo petrol, and while we’ve already warmed to the ProCeed when powered by the most potent 1.6-litre turbo petrol in GT trim, it’s the more affordable diesel we’re driving here. The 1.4 petrol and 1.6 diesel are both are available with a six-speed manual gearbox or, for an extra £1,100, a seven-speed dual-clutch auto. The flagship GT is auto only. 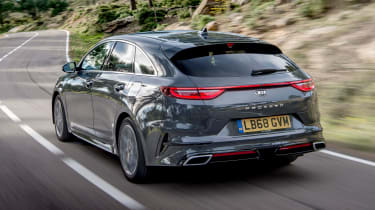 Whether buyers prefer the concept of a sporty three-door or swoopy estate remains to be seen, but the Mercedes CLA Shooting Brake-esque look certainly offers something unusual in this class. The rear LED lighting signature looks great, but there are parts of the design – like the silver trim on the C Pillar – that look a little messy. Overall, however, it’s a handsome thing.

If only the cabin was quite so attractive. While we criticise some cars for relying almost exclusively on touchscreen interfaces that sacrifice ergonomics in the name of style, the ProCeed’s button-heavy design sits at the opposite end of the scale. Trying to get familiar with the layout goes to show that having too many switches can be just as distracting as having too few. The overall vibe is salvaged somewhat by a lovely steering wheel that’s as attractive to look at as it is pleasant to hold.

The ProCeed’s roofline is 43mm lower than the Sportswagon estate, so in order to compensate for the loss of headroom, the rear seats are also lower. The result is roughly the same distance from seat squab to ceiling, but the drop in the occupant’s hip point will be felt by taller rear seat passengers, due to a lack of thigh support. Boot volume is stated at 594 litres – not quite a match for the estate’s 625 litres, but still far more than you’ll get from a typical hatch.

There is one other downside to that sleek shape, though. The rear window is very small and positioned quite low, which means visibility is compromised; a glance through the rear-view mirror offers little more than a view of the tarmac you’ve just driven on.

Keeping to its sporty brief, the ProCeed gets a marginally firmer, lower set-up than the rest of the Ceed family, which benefits from sophisticated fully-independent suspension all-round. The changes don’t transform the way it drives, but a twisty road reveals a little extra body control. The steering still doesn’t have much in the way of feel, but it’s light and precise. Suspension noise is very well suppressed from the cabin and, slightly jiggly low-speed ride aside, it’s smooth and composed. 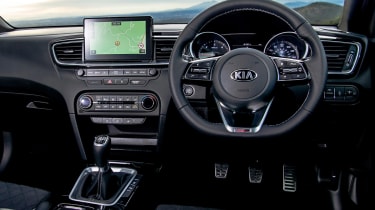 The 1.6-litre diesel is the same engine used elsewhere in the Kia range. It can sound harsh towards the redline, but otherwise it’s no louder than the (admittedly thrashy) 1.4 petrol. Performance doesn’t quite match the car’s sporty brief though; 0-62mph takes a leisurely 10 seconds. We managed a little over 50mpg on our test run, which isn’t far off Kia’s 56.5mpg claim.

The only true letdown to the driving experience are the gearboxes. The manual box is hampered by both a wooly throw and a sloppy clutch bite, which conspire to make make smooth progress frustratingly tricky. The more expensive auto is no better: it slurs lazily through changes, and is slow to respond when controlled through the steering wheel-mounted paddles.