The Kia ProCeed trades a little practicality for a racy looks and spritely performance, with prices starting from just under £24k

Kia has announced pricing and specification information for its new ProCeed shooting brake. Due to go on sale later this year, prices start at £23,835 for the 138bhp 1.4-litre GT-Line model and climb to £28,185 for the range-topping 1.6-litre GT.

The ProCeed badge was reserved for the three-door hatchback in the model’s previous generation. Now, however, the ProCeed adopts shooting brake proportions and is wedged between regular five-door Ceed hatchback and the Ceed Sportswagon estate. It’ll be built alongside the duo at Kia’s Žilina production facility in Slovakia.

Like the new Kia Ceed GT hatch, the ProCeed GT is powered by a 1.6-litre turbocharged four-cylinder petrol with 201bhp and 265Nm of torque. Unlike the GT hatch, however, this engine is only available with a DCT rather than a manual. 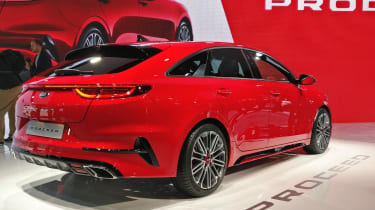 Despite the change in gearbox, performance figures are almost identical between the Ceed hatch and shooting brake GTs, with the ProCeed dispatching 0-62mph in 7.2 seconds and achieving a claimed top speed of 140mph; only three mph slower than the hatch. Economy figures are slightly improved, at 39.3mpg.

The new ProCeed has been developed exclusively for the European market. As such, it’s been configured to cope with the twisty European road network, featuring larger brakes, independant suspension, stiffer dampers and slightly softer anti-roll bars to keep the ProCeed’s wheels in contact with the road when cornering. 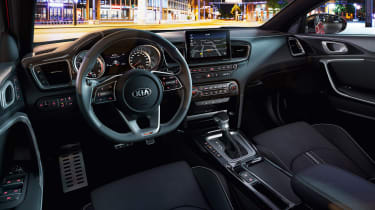 Where practicality is concerned, Kia says that the lower roofline has been offset with a slightly sunken bench, unlocking a bit more headroom. The rear bench is still a 40:20:20 split folding set-up enabling a totally flat cargo bay, while with all seats in place boot space sizes up at 594 litres, down from the 625 litres found in the Ceed Sportswagon.

Now read our review of the new ProCeed GT. Let us know your thoughts in the comments section below…