The new Kia Ceed SW is the second of four new Ceed models, and it's made its debut at the 2018 Geneva Motor Show 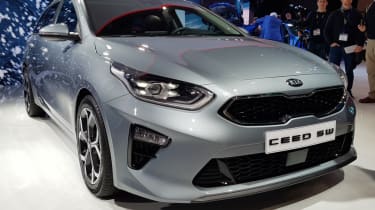 The all-new Kia Ceed Sportswagon has been unveiled alongside the recently revealed family hatch at this year’s Geneva Motor Show. It’s the second of four new Ceed models, and will go on sale in the autumn.

Designed, engineered and built in Europe, the new Kia Ceed SW takes much of its styling inspiration from the forthcoming third-generation hatchback, as well as the sporty Stinger four-door coupe. It gets a similar front end and tiger nose grille, while the rear echoes the established Optima SW.

Kia has high hopes for its new estate, as historically, the SW version has accounted for 40 per cent of all Ceed sales. Like the new hatch, it drops the apostrophe, to become simply Ceed SW – a move apparently prompted by improving Google search traffic. 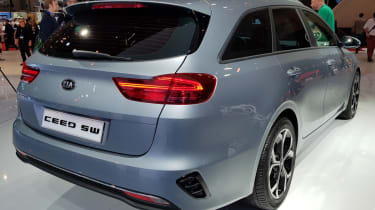 Lower and wider than its predecessor, the new Ceed SW also gets a longer rear overhang, helping disguise the more practical interior. The boot is 72 litres bigger than before (now 600 litres), while the 40:20:40-split seats fold completely flat. Kia says the boot lip is much lower, too, to help when loading large or heavy items. We’ve no official volume with the seats down, yet, though we expect a modest increase over the existing car’s 1,660-litre load bay.

From launch, the Ceed SW will be available in 11 different colours, as well as a range of trims including a high-spec and sporty GT-Line variant. Kia will even offer a set of 17-inch two-tone diamond cut alloy wheels on flagship cars. UK specs and prices will be announced later, but prices aren’t expected to rise significantly over the current car’s £16,820 starting figure.

Inside, Kia says the new SW is more ergonomic than ever, with “higher quality materials used throughout”. The horizontal dash design is identical to the hatchback’s – with a standard-fit touchscreen flanked by a pair of air vents, sitting above the car’s stereo and heating controls. Kia says the cabin will be covered in metallic or satin chrome trim, with buyers able to to choose cloth, synthetic or leather finishes for the seats. 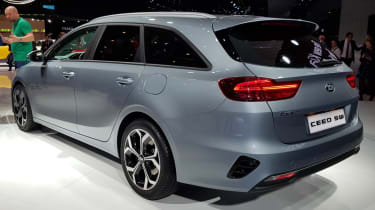 Kia claims the Ceed SW will become the “most high-tech car in the compact tourer class” when sales commence towards the end of 2018. Kia Connected Services are available on range-topping cars, along with TomTom sat-nav, Apple CarPlay and Android Auto. Features such as automatic lights, keyless entry and a heated windscreen, also appear, as well as full-LED lights.

In terms of safety, the Ceed SW will come loaded with everything from High Beam Assist, to Driver Attention Warning, Lane Keeping Assist and Forward Collision Warning. It also gets a series of ‘Level Two’ autonomous features, such as Lane Following Assist; a system that can watch the road ahead – operating at speeds between 0-80mph.

Again, just like the hatch, the SW has been tuned for European roads, allegedly elevating it over the old car in terms of ride and handling. We’re told the estate is unlikely to carry over the hatchback’s entry-level 1.4-litre engine, favouring the more powerful turbo petrol and diesel units. These include the 1.0-litre T-GDi, a new 138bhp 1.4 T-GDi, and a pair of 1.6-litre CRDi engines. A six-speed manual will be standard across the range, with an optional seven-speed DCT also available.

More information will be revealed closer to the car’s on-sale date, with order books expected to open in the fourth quarter of 2018.