The new Kia Ceed has been unveiled, alongside full details and specs for the new VW Golf rival

Prices and specs for the all-new Kia Ceed have been revealed, spanning 11 variants across four trims, three engines and two transmissions. Prices start from £18,295 for the basic Kia Ceed '2' - rising to £26,850 for a flagship Ceed First Edition model.

The all-new Kia Ceed was revealed at the 2018 Geneva Motor Show, and has been designed for and developed in Europe. It rivals big-selling cars like the Volkswagen Golf, Ford Focus and Vauxhall Astra, and is available to buy now. It is longer and wider than the model it replaces. However, the biggest news (especially for spell checkers) is that the name has changed from cee’d to Ceed. 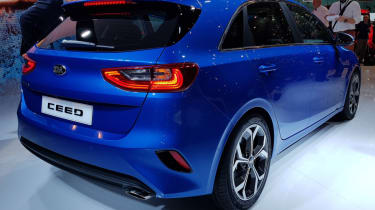 Next up is the Kia Ceed Blue Edition (from £21,095). Available only with the 1.4-litre T-GDI turbo petrol engine, it comes exclusively with Blue Flame paint and adds all the kit standard on '2' versions. All Blue Edition cars get 17-inch wheels, privacy glass, rear parking sensors and LED lights. Inside, there's some faux leather trim and an eight-inch touchscreen sat-nav. A seven-speed auto is available, priced from £22,195.

Next up is the Kia Ceed '3', which gets a similar kit list to the Blue Edition car. With extra goodies such as dual-zone climate control and a 4.2-inch colour cluster display, it's expected to sit above the Blue Edition when prices are revealed at a later date. 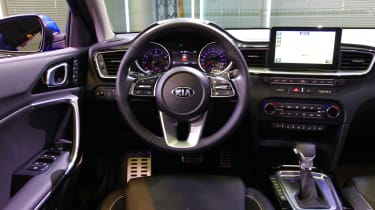 While the Kia Ceed is technically all-new, the design is familiar. There's a sharper look that’s intended to make it appear more sporty; at the front, there’s a wider version of the company’s ‘tiger-nose’ grille, while the air intake is set lower down, and the ‘ice cube’ LED daytime running lights that were exclusive to the old GT and GT-Line models will be standard on all new Ceed models.

Those straighter lines continue at the rear, where the Ceed also has the wide pillars behind the rear doors that have become something of a Kia trademark. This then contrasts with the curved look of the LED rear lights.

Inside, the emphasis has been on raising quality, but the overall design is typically Kia, with the dashboard effectively split into two. The top half houses the standard touchscreen, while the bottom has the controls for the stereo and ventilation.

Meanwhile, thanks to the lower driving position, there’s more headroom in the front. Rear-seat passengers have more shoulder room, too, and the 395-litre boot is larger than a Golf’s.

According to Kia, the new Ceed features fully independent suspension – allied to quicker steering – that will make the car feel more agile. But, at the same time, they say, it will give a comfortable ride, better body control and greater stability at high speed.

The wide range of engines includes a revised 118bhp version of the turbocharged 1.0-litre petrol engine, while a new 138bhp 1.4-litre unit replaces the old 1.6. Kia UK has chosen to avoid the ageing 98bhp 1.4 GDi, by not offering it this time around.

In addition, one 1.6-litre CRDi diesel engine will be available, with 114bhp. This version emits 99g/km of CO2 and like all the engines comes with a six-speed manual gearbox as standard. A seven-speed dual-clutch transmission will be optional on all but the entry-level 1.0-litre T-GDi petrol engine.

Thanks to the Drive Mode Select system, the driver can tailor the responses of the engine and steering. In Normal mode, the emphasis is on fuel economy and easy manoeuvrability, while Sport gives quicker acceleration and more weight to the steering.

Last, but not least, Kia claims that the new Ceed will be the most hi-tech car in its class. Bluetooth connectivity, automatic lights and keyless entry will be standard, while for the first time on a Kia, a heated windscreen will be available. 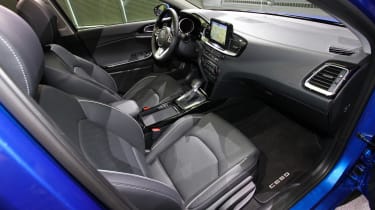 Also appearing on a Kia for the first time is the Lane Following Assist system, which can perform a variety of functions at up to 81mph: spot gaps in traffic to move into in heavy traffic; follow lane markings on the motorway; and, control the brakes, steering and accelerator to keep up with traffic.

Although the precise on-sale date for the UK is yet to be confirmed, Kia has said that the car will go on sale in Europe in the summer. Prices, too, are yet to be set, but we don’t expect much change over the current range, which starts at just over £15,000; and, like all Kias, the new Ceed will be covered by the company’s seven-year, 100,000-mile warranty.

“Goodbye Kia cee’d, hello Kia Ceed”. Click through to page two to get our view on the family hatch’s name change…