We've been impressed by the new Kia Ceed hatch, but is the Sportswagon estate just as good? We find out... 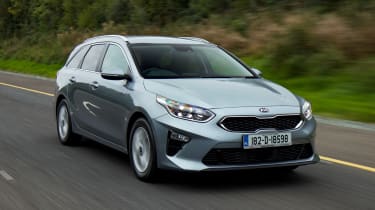 The third-generation Kia Ceed hatchback has now spawned a spacious and high-quality Sportswagon estate. It inherits the standard car’s modern look, but doesn’t compromise on boot space – making it a great family option for those who need loads of room in the back.

As we’ve already discovered from our first drives in the all-new Kia Ceed hatchback, the third-generation Korean car has taken a useful step forward in its bid to take on the class leaders such as the Ford Focus, Volkswagen Golf and Skoda Octavia.

Now it’s time to assess the Ceed Sportswagon estate version, which follows the same formula as before, but with more boot space than ever. Given that the previous Sportswagon accounted for as many as 40 per cent of Ceed sales, this is an important model for the brand.

Unsurprisingly, the front of the Ceed Sportswagon (SW for short) is identical to that of the Kia Stinger-inspired hatch, featuring distinctive ‘ice-cube’ LED daytime running lights across the range. The estate gets a longer rear overhang (a significant 115mm longer than its predecessor’s) to match the elongated roofline, though Kia’s designers attempted to disguise that by the use of standard-fit roof rails and a tacky looking fake vent behind the rear wheels. 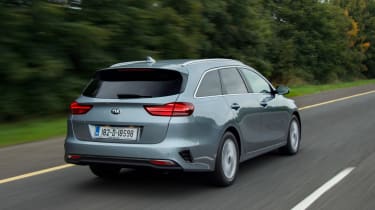 It’s certainly not the sharpest-looking car in its class; an opinion emphasised somewhat if you go for the weedy looking 16-inch wheels of our 2-spec test car. Nonetheless, the Ceed SW gets a modern design at the back thanks to a set of new LED lights, and fresh ‘Ceed’ scripture without the previous generation’s bizarre apostrophe.

More importantly to C-segment estate buyers is the fact that Kia has managed to offer more boot space than before. The new car holds 600 litres with the rear seats in place – putting it within a few litres of all the Focus Estate, Golf Estate and Octavia Estate. Kia has also lowered the lip height so it’s a little easier to get heavy items in.

The rear seat backs split 60:40 in the Ceed ‘2’ and fold down to create a completely flat floor. In higher-spec versions the split is 40:20:40, however, and the operation is eased from the rear of the car by using levers in the boot. Under the floor itself is an extra hidden storage area, while range-topping First Edition models also come with a useful luggage rail system.

Back in the main cabin, the Ceed SW is no different to the hatch, which is to say that it’s made of top-quality materials and its controls are as good to touch and use as any in the sector. Even the entry-level seven-inch touchscreen is intuitive to operate and sensibly laid out, plus it allows access to Bluetooth, Android Auto and Apple CarPlay ­– all with decent voice control. The eight-inch version fitted to cars above level ‘2’ includes sat-nav and the new Kia Connected Services system. A clear reversing camera is standard throughout.

On the road, the Ceed SW feels as stable and grippy as the hatch, with no obvious penalty from the longer rear and extra weight. A chance to try the estate on the basic 16-inch wheels revealed that it does indeed improve ride comfort; the harsher set-up was one of our few bugbears with the Ceed when fitted with 17-inch alloys. Saying that, there’s more road noise coming from the back of the SW estate on certain surfaces, especially if the retracting luggage cover is left open. A thought worth remembering for longer motorway journeys. 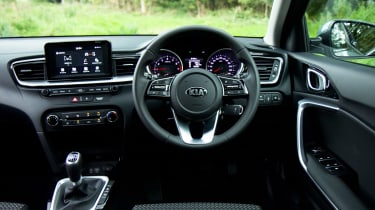 And while those that spend most of their driving on the motorway may be advised to go for the 1.6-litre CRDi diesel model, we favour the turbo petrol alternatives. Kia reckons the best-seller will be the new 138bhp 1.4 T-GDi engine, which is also available with a dual-clutch automatic gearbox.

However, for mostly urban driving, without a car full of passengers and luggage, the 1.0-litre T-GDi option is well worth a look. It’s a three-cylinder turbo petrol unit, but is far smoother and quieter than most rival units. Those who enjoy strong acceleration won’t be enamoured by this engine, but it’s faster than you’d expect, and keeps costs down with a notably low insurance rating and £19,295 starting price.

Speaking of costs, the Ceed SW isn’t the conspicuous bargain it once was, but it’s well-equipped across the board and, of course, features Kia’s impressive seven-year warranty.