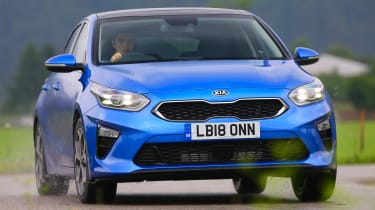 Even though its 1.4-litre engine is a strong performer, the Kia Ceed First Edition simply has too much extraneous equipment and too high a price tag – cash or on finance – to be our pick of the range. There’s plenty of kit on cheaper models and they won’t be any less practical. Added to the fact they’ll also be more comfortable due to their smaller wheels, these elements could make the Ceed a shoo-in for any family hatch shortlist.

The all-new Kia Ceed showed real promise when we tried it abroad a few months back. Now it’s time to see if the Korean brand’s latest rival for the VW Golf, Vauxhall Astra and Ford Focus can put in a similarly good showing on the UK’s notoriously pockmarked roads.

There should be precious few excuses for a below-par performance, too, because the Ceed we’re driving here is a ‘First Edition’, loaded to the gunnels with kit and equipped with the 138bhp 1.4-litre turbocharged petrol engine that is, for now, the hot spot in the range.

There’s also a 1.0-litre three-cylinder unit with 118bhp, and a 1.6-litre diesel with 114bhp although, given how Kia is really targeting big names like the Focus and Golf, it’s no surprise to see that a faster Ceed GT is already on the way. 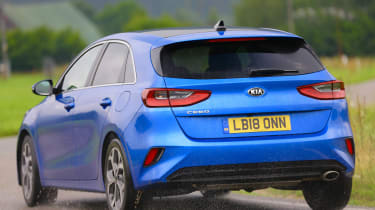 That said, the Ceed we’re driving here does not feel like a car desperately in need of more power. There’s enough punch to get the car from 0-62mph in under nine seconds, and if anything, the mid-range surge is more telling; this Ceed feels every bit as capable during overtaking as the comparable VW.

Refinement is impressive, too; there’s a bit of metallic fizz somewhere around the 3,000rpm-mark but in truth, you won’t often feel the need to rev it to that point. There’s such a strong bottom end on the motor, in fact, that you can shift up at 1,500rpm, use the 242Nm of torque and pull it along quite happily; you won’t feel much need to give the (admittedly slick) six-speed manual gearbox much of a workout.

The petrol engine’s smooth note is easily drowned out by the tyre roar from the First Edition’s 17-inch wheels, but that aside, the Ceed does a good job of insulating you from the world around you. There’s not much wind noise from around the side mirrors, for example.

However, we had a few reservations about the Ceed’s new K2 chassis during our early drive in Portugal and in general, this UK experience has done little to remove our doubts. At low speeds there’s enough compliance, meaning the car feels assured around town, but once you’re up and running the overall firmness of the set-up shines through and the Ceed never really settles in the way a Golf does. Even the latest Ford Focus – another car that’s had criticism for its firm ride – does a slightly better job of calming down at a cruise. Still, the Kia’s steering is pleasingly direct.

Of course, the First Edition – and the 3-spec model on which it’s based – gets sporty 17-inch wheels as standard. Previous experience in the SW estate showed the entry-level 2 trim (with its 16-inch rims) offered a sweet spot with regard to ride and handling.

More modest Ceeds offer better value for money, too. Because while the First Edition piles on the kit – everything from an eight-inch touch-screen with navigation to leather upholstery and a 10-way power-adjustable driver’s seat and even heated outer rear seats – it does so at a price. Our car, as tested, was £25,750, and even with a 10 per cent deposit and a further contribution from Kia, you’d be looking at more than £360 per month on a three-year/30,000-mile PCP finance deal. 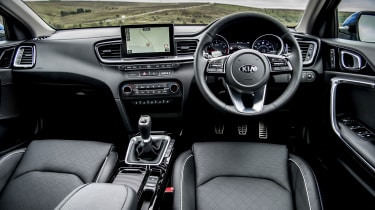 We remain convinced, therefore, that the considerably cheaper Ceed 2 will be the better buy. It’s quick enough in 1.0-litre form, and delivers plenty of standard equipment. Those cars make use of a slightly smaller touchscreen but don’t get navigation – yet with Android Auto and Apple CarPlay you can hook up your smartphone for directions anyway. We could live without leather upholstery on a family hatch, too.

Regardless of kit, the rest of the new Ceed package is a solid one. There’s enough space in the back seats for a couple of adults, and the boot measures a hefty 395 litres with the second row in place and 1,291 litres with it folded down; you’d be hard pushed to match those sort of capacities in any other family car this side of a Honda Civic or Skoda Octavia.