Korean company aims to add style to its practical Cee'd. 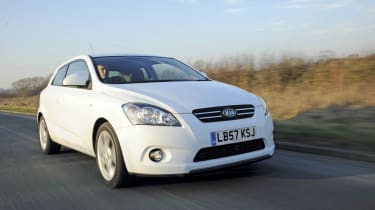 With the Pro_cee’d, Kia has shown that it’s ready to tackle the best in Europe. It features genuinely attractive styling, a decent chassis and an excellent powerplant. There’s also loads of equipment, it’s solidly built and has an aftersales package that will have its competitors worried. Best of all, this is aKia that is truly desirable – the Pro_Cee’d matches even prestige rivals for style.

Could this be the model that finally breaks Kia into the hot hatch market? The Korean company has a reputation for offering practicality at a good price, but is now preparing to move into the performance arena with a new three-door evolution of the Cee’d.

The rakish Pro_cee’d hits the UK’s roads this week, and promises to add a dash of glamour and driving fun to the line-up. Yet this doesn’t mean Kia bosses have forgotten about the core values of their brand. The top-of-the-range 2.0 CRDi Sport version we drive here weighs in at £15,495 – that’s £1,000 less than the equivalent Ford Focus. It comes loaded with equipment as standard, and benefits from the same exceptional seven-year warranty as the five-door models.

So, does the newcomer manage to blend driveability, desirability and practicality into a winning package? We got behind the wheel of the first UK car available to find out.

Externally, the Pro_cee’d looks far sleeker than the five-door. While the nose bears a strong family resemblance, from the base of the windscreen backwards it’s all new.

A 30mm drop in height, a high waistline and steeply raked rear give the car a lower and more purposeful stance. Climb aboard, though, and the surroundings will be familiar to owners of the more common Cee’d.

All the interior fixtures and fittings have been lifted straight out of the five-door, with the exception of the door trims, which are subtly redes-igned. While the materials aren’t quite out of the top drawer, the interior is solidly constructed. The dash is clearly laid out, there’s plenty of kit and the indicator stalk has finally moved to the left of the steering column.

There is plenty of space up front, but occupants in the back aren’t quite so lucky. Access to the rear is tight, while the lowered roofline and high window line create a claustrophobic environment. Still, behind the 60:40-split back bench is a large boot with 340 litres of load capacity.

All Sport models feature the latest 138bhp 2.0-litre oil-burner. But while it’s the most powerful engine in the line-up, it falls a little short of delivering hot hatch performance. The sprint from 0-62mph takes a lengthy 10.1 seconds, although acceleration in the mid-range is stronger.

With 305Nm of torque from only 1,800rpm, the smooth-spinning diesel serves up useful punch for overtaking, while a long sixth gear means motorway journeys are refined and relaxing. Best of all, though, the new-comer will still return an impressive 50.4mpg. Meanwhile, in an effort to make the Pro_cee’d feel as sporty as it looks, Kia has added thicker anti-roll bars and uprated dampers. Plump for the Sport, and you also get tweaks to the electrically assisted steering, as well as even stiffer suspension.

The car demonstrates great agility, with the weighty and precise controls allowing you to place it accurately. The only downside is that the ride is upset by poor road surfaces.

At present, this is the hottest version of the three-door, and there are no official plans to add the powerful 2.0-litre turbocharged petrol engine from sister firm Hyundai. Buyers on a tighter budget can opt for cheaper 1.4 and 1.6-litre petrol versions, or the excellent 1.6-litre CRDi. But whatever is under the bonnet, the Pro_cee’d is all set to be a big success for Kia. By mixing the five-door car’s great value and solid build with sleek good looks, the company has created a package which is now more than capable of taking on the class leaders.