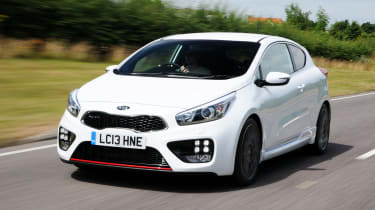 The Kia Pro_cee’d GT has the looks to fit in with the rest of the hot hatch competition, but it’s a bit short on the fun factor. Its steering doesn’t feel suited to a performance hatch, and on Britain’s rutted city streets the ride seems too firm. When you’ve got extremely capable cars such as the Leon SC FR at the same price, the Pro_cee’d GT doesn’t quite match up.

The  Kia Pro_cee’d GT is proof that Kia believes its brand image is strong enough in the UK to launch its first ever hot hatch.

To term the newcomer as a hot hatch may be overselling it slightly, as even Kia prefers you call it ‘warm’, with its 201bhp 1.6-litre turbo seriously outgunned by models such as the 247bhp Ford Focus ST. As a result, it feels punchy but not with the kind of manic mid-range boost and top-end shove you get in the current crop of fast hatchbacks.

Instead, there’s a generous kick of torque between 1,750rpm and 4,000rpm, but try to take the engine past that and it soon runs out of puff. Still, a 0-62mph time of 7.4 seconds confirms that this car is no slouch, although the engine note is a bit of a drone.

Its big test comes in corners, and it’s here that the GT doesn’t feel sufficiently special. There’s more front grip than in a standard Pro_cee’d, but the steering does not feel quick or weighty enough. It means that where a Focus or VW Golf feel eager, the GT seems more ponderous. Not enough information is passed through the steering wheel to the driver, either, disappointing anyone expecting to find a cut-price GTI rival.

Also, despite not feeling as quick or fun as its rivals, the Kia’s suspension actually seems firmer than most cars this side of a Renaultsport Megane 265. This is fine on bumpy B-roads, but on rough city streets abrupt thuds make their way into the cabin.

That’s a shame, because it detracts from the premium feel that’s apparent everywhere in the Pro_cee’d GT. The interior looks great, with classy additions such as the sports steering wheel and excellent sports seats, and refinement is top-notch. There’s more tyre roar at motorway speeds, but the low level of wind noise is impressive, as is room in the back seats and boot.

Despite those low-slung looks, adults fit in comfortably, and the 360-litre load space (plus 20 litres under the boot floor) is competitive. Our major gripe is the fact that the upwards-sweeping window line makes it really tricky to check your blindspot when changing lines.

It has the same performance and eye-catching looks and can be specced with all the kit of the £22,495 GT Tech – it comes with sat-nav, 18-inch alloys and part-leather seats – for about the same price. Swinging things in the SEAT’s favour is the fact it’s cheaper to insure and run, more comfortable and feels more fun.