We drive a prototype version of the Kia Pro_cee’d GT, which will be the company’s first-ever hot hatch 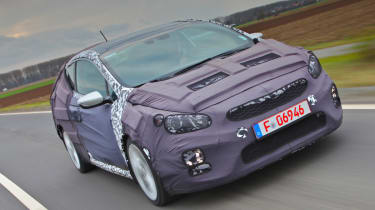 The Pro_Cee’d GT doesn’t have the firepower of its rivals. It’s just a warm hatch, yet none the worse for that. It’s a car you can use every day, but which will still reward a blast on an empty stretch of road. It’s the perfect way for Kia to dip a toe into this highly competitive market. At an estimated £22,000, the car will be expensive compared with the more competent and thrilling £23,495 Ford Focus ST, but it should still appeal to existing Kia owners.

If you need any further proof that Kia is serious about taking on the established players in Europe, the Pro_cee’d GT is it.

This car is billed as Kia’s first hot hatch, but you have to forget the tortuous model name and concentrate instead on the 1.6-litre, direct-injection turbocharged petrol engine and six-speed manual transmission.

The Pro_cee’d is hugely ambitious, and up against tough competition from the likes of the Mk7 Volkswagen Golf GTI, the well received Ford Focus ST and the rocket-fast Renaultsport Megane 265.

With just 201bhp and 265Nm, the Kia comes from the warm end of the hatchback oven rather than the scorching hot part, although fine tuning on ride and handling has been done in Germany, and the initial signs are promising.

The official launch takes place at the Geneva Motor Show next March, after which we’ll get a full road test in the car, with UK sales commencing in June or July.

The GT will be available as a five-door Cee’d and three-door Pro_cee’d. So far, only design sketches have given a clue as to appearance, which is why the pre-production Pro_cee’d GT we drove was heavily disguised.

Step inside, and it’s clear this car means business. The staid Cee’d interior has been jazzed up with a sports steering wheel, alloy pedals and Recaro seats.

The driving position is good, with height and reach-adjustable steering, while other kit unique to the GT includes 18-inch alloy wheels, body stripes, special LED running lamps, and new bumpers and exhausts.

The 1.6-litre petrol engine has direct fuel injection, a twin-scroll turbocharger and oil-cooled pistons, while the six-speed manual transmission features closer-stacked gear ratios for a more sporting response from the throttle.

Immediately you can feel the engine’s extra urge. Not much happens below 2,000rpm, but from there the revs roll on to a wave of torque all the way to 6,500rpm. It’s not quite as outwardly powerful as the BMW/Peugeot 1.6-litre engine that’s fitted in the MINI JCW, but it’s pleasingly brisk.

One problem is the engine’s reluctance to drop revs quickly enough when you come off the throttle, which hinders gearshifts – this will need sorting before the car goes on sale. Another possible cause for concern is the artificial, and rather loud, engine noise, but Kia says this is also a work in progress.

On the smooth German roads of our test, it was difficult to determine the exact nature of the ride quality, but there seems to be good compliance in the MacPherson strut front and multi-link rear suspension units, although the occasional bump produces a big bang from the front wheels. The car also corners flat, with little body roll.

The over-assisted steering could use more on-centre response and feedback, and doesn’t inspire confidence in the same way as the Ford or Renault.

Mechanical grip is fairly good, and you can drive the car quite fast, yet it never encourages you to do so. The swinging caliper brakes are adequate, but need more initial bite – something that’s also receiving attention.