Final report: After 8,064 miles striking white three-door is leaving our fleet. Big question is, will we miss it? 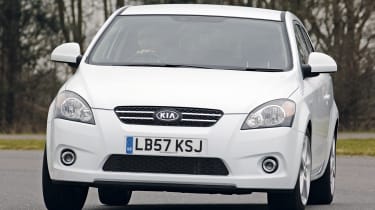 Think of a Kia and it’s unlikely that the word desirable will be the first to spring to mind. Instead, the Korean firm has gained a reputation for making sensible, well built cars for buyers who really appreciate good value.

However, with the rakish Pro_cee’d hatchback, bosses want to attract a more style-conscious customer. So, has this Kia managed to rule our hearts rather than our heads during its time on our long-term fleet?

There’s no doubt that the car scores well for its looks – the classy shape is the best effort yet by the manufacturer. With its sweeping roofline and steeply raked rear, the Pro_cee’d has more than a hint of Audi A3, which is no bad thing. But to earn its keep during its year with us, the Kia needed to be much more than just a pretty face. So, the three-door was immediately put to work by our road testers, spending its first two weeks in their care (Issues 1,002 and 1,004). It was borrowed again for a winning encounter against the Toyota Auris (Issue 1,037).

On each occasion, the Pro_cee’d impressed with its practicality. Open one of the long front doors and you will find a spacious and solid cabin. We made plenty of use of the various cubbies, while the air-conditioned glovebox kept our drinks cool in hot weather. Lift the tailgate and you reveal a generous 340-litre boot. Drop the rear bench and the carrying capacity stretches to 1,300 litres – that’s enough for stowing a mountain bike without having to remove its front wheel.

The Kia is fully kitted-out, too. Our range-topping Sport model came with black leather trim, climate control and a handy built-in USB socket for connecting to an iPod. But all this would be for nothing if the Pro_cee’d hadn’t been good to drive. Happily, everyone who got behind the wheel came away impressed.

There was plenty of praise for the punchy 138bhp 2.0-litre turbodiesel powerplant. All who drove the car remarked on the common-rail unit’s refinement and small appetite for fuel – it returned an average of 45.1mpg over more than 8,000 miles.

The Pro_cee’d proved incredibly reliable, too. A loose handbrake was the only real cause for concern, while a punctured tyre was quickly and easily replaced. There was also some minor damage to the front bumper – it cracked when our stranded hatch was pulled out of a muddy car park by a tractor!

However, our biggest disappointment came when we discovered the Kia’s trade-in value. We were told that it was worth only £10,900 – a drop of nearly £5,000.

Still, our loss would be the second-hand buyer’s gain, as this price also includes the balance of Kia’s generous seven-year warranty. More importantly, they’ll be getting a good-looking, well equipped and versatile hatchback that can easily cut it with much more expensive machinery.

I’m in two minds about the Pro_cee’d. There’s no doubt it looks sharp, particularly in the striking white paint of the model we’ve been running for the past year. The diesel engine is also punchy, while its economy can’t be faulted – to average 45mpg when based at a London address is superb. The only missing ingredient is sporty handling. Although there’s nothing wrong with the Kia’s dynamics, it’s not as agile as a true hot hatch. With a few tweaks, it could teach some more established cars in this class a lesson…