The looks of a hot hatch with the economy of a basic petrol engine...we drive the entry-level Pro_cee'd. 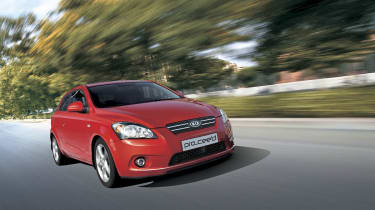 The Pro_cee’d is a fine addition to the range. It’s good looking, costs the same as its five-door brother and comes with all the usual Kia virtues. And this entry-level 1.6-litre petrol is one of the most appealing models. While the driving experience lacks a bit of sparkle, it’s precise and good fun, and carries a bargain price. High-mileage drivers might be better off with the 1.6 diesel, but there’s still much to recommend about this more basic petrol.

Excitement is on the agenda at Kia like never before. With an all-new Audi TT-rivalling coupé on the horizon, the company is really raising its profile.

Helping its cause further is the stylish Pro_cee’d, which is already introducing new customers to the brand. We’ve tested the flagship diesel versions, but could this entry-level petrol model be the pick of the lot?

Power is from a 124bhp 1.6-litre featuring variable valve timing, so the car promises peppy but economical performance. And it’s priced very competitively. At £12,295, it undercuts its closest rival – the Vauxhall Astra Sport Hatch 1.6 SXi – by nearly £3,000, yet it comes better equipped.

Lay eyes on the Pro_cee’d for the first time and there’s no doubt that it’s a very stylish machine. As with the Astra, it distances itself from its five-door brother with a totally redesigned body. Not only is it 15mm longer than the Cee’d, it’s also 30mm lower and gets a more steeply raked windscreen, plus a sporty roof spoiler at the rear.

The only body panels shared with the Cee’d are the front wings and the bonnet. Add 16-inch alloys fitted as part of the 1.6-litre’s impressive specification list, and it’s arguably the best-looking car Kia has ever built.

Inside, the cabin is identical to that of the Cee’d, and while the quality of the plastics and trim isn’t as good as in a Ford Focus or VW Golf, everything is logically laid-out and well styled.

Our car was a basic 2 trim – equivalent to GS spec on the Cee’d – but nevertheless, equipment includes a USB input for MP3 players, a punchy CD stereo and air-con as standard.

Access to the back seats isn’t particularly easy, even though the doors are long and their hinges mean you can open them in three stages. But in this respect, the Pro_cee’d is no better or worse than its competitors. The fact that the front seats slide forward and return to their original position takes away some of the hassle. As in other three-doors, the back is best suited to children or small adults. But the boot is big and the rear bench splits and folds flat, without the need for the headrests to be removed.

Settle into the driver’s seat and the lower rooflining and shallower windscreen do make it feel slightly more sporty. But when you look over your shoulder, the chunky C-pillars restrict rearward visibility.

The 1.6-litre petrol engine delivers 124bhp at 6,300rpm and 154Nm of torque at a high 4,200rpm. So while the 0-62mph sprint is completed in a respectable 10.8 seconds, if you want decent performance, you have to rev it quite hard and make the most of the five gears. Still, the powerplant is quite refined and economical, too, returning 44mpg on the combined cycle.

In corners, the Pro_cee’d doesn’t excite as you might hope. Uprated anti-roll bars and dampers do a good job of limiting body roll, and the handling is generally precise and agile – noticeably more so than in the nose-heavy diesel models. But the steering still has an odd self-centring effect, and doesn’t provide sufficient feel.

As with the Cee’d, the ride is too firm – something that’s made worse by the uprated suspension and larger alloy wheels. Yet while this Pro_cee’d isn’t quite as polished as a Ford Focus, it’s amazing value for money and very attractive to look at. Add in a seven-year, 100,000-mile Kia warranty, and it provides peace of mind, too.