The Pro_cee’d isn’t quite the step forward we were expecting from Kia. 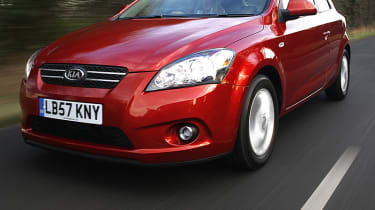 Driving The Pro_cee’d, with its stiffer chassis over the five-door, handles well. Steering is nicely weighted, offers reasonable feedback and turns the car in precisely, with strong grip. It’s not quite as sure-footed and confidence-inspiring as the class best, but body control is good. Ride quality does suffer a little over the five-door, though. Petrol engines are a little average but the 1.6-litre CRDi turbodiesel is very strong. It’s preferable to the 2.0-litre, which, while quiet enough on the move, can clatter at low revs and never feels particularly quick. The gearchange has a light touch but it’s long in throw.

Marketplace The Pro_cee’d has a character all of its own. Sitting 30mm lower than the five-door, the three-door hatch has an elongated, coupe-like stance – an impression reinforced by the long doors. It looks more athletic and stands out better than the five-door, and should help attract younger buyers. The rear is the real talking point, thanks to high-set lights, raked screen and narrow tailgate. Unlike the five-door, which uses letters for its trim names, the Pro_cee’d uses numbers – 1, 2 and 3, with a Sport range-topper. Rivals include the Vauxhall Astra Sport Hatch, Volvo C30, Renault Megane Sport Hatch and Citroen C4 Coupe, along with the Ford Focus, Hyundai i30 and Peugeot 308.

Owning It’s a shame the interior isn’t as bold as the exterior. Virtually identical to the five-door, we expected something a bit sportier. And while there’s no arguing with quality, it’s not quite up to Golf or Focus standards. But the soft-touch dash and air conditioning controls are neat, and the stereo easy to use, although it does constantly need retuning on the move. Accessing the back seats isn’t easy, but once there, passengers will find ample kneeroom. The 340-litre boot is big, too, and folding the seats is simple – you don’t have to remove the head restraints. The Kia is great value too, with competitive prices and excellent levels of standard equipment. The Pro_cee’d also looks to have better retained values than the five-door – though they are still a little way off three-door rivals such as the Vauxhall Astra Sport Hatch. You do get Kia’s excellent 100,000-mile, seven-year warranty, though.