We get behind the wheel of the all-new, three-door Kia Pro_cee'd for the first time to deliver our verdict 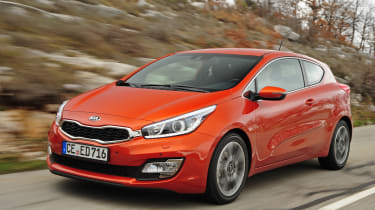 The Pro_cee’d is up there with the Sportage as Kia’s most stylish models. It’s an interesting mix, too, as the sleek, sporty design is blended with a surprisingly practical interior for a three-door car. Kia’s pragmatic approach extends to the driving dynamics that are tuned for comfort rather than speed, acknowledging that its real-world customers are after a car that’s as sharp to look at as it is easy to live with.

Kia has come a long way in a short space of time, thanks largely to its design-led revolution. And the new Pro_cee’d is perhaps the best example of how far it’s come, particularly when you compare Kia’s approach to that of sister-brand Hyundai.

The i30 three door simply looks like an i30 with two fewer doors, but the Pro_cee’d looks like a model in its own right – making it closer in philosophy to a VW Scirocco or SEAT Leon SC than a three-door VW Golf.

The swept-back headlights owe a little to the Chris Bangle-designed BMW 5 Series, while the narrower version of the Tiger snout grille extends right up to each headlights, just like the current 3 Series.

It’s the same length and width as the current Cee’d, but because of the revised nose and 40mm lower roof height, the three-door car has a sportier stance on the road. To aid access to the rear seats, the Pro_cee’d’s front doors are 270mm longer than those on the Cee’d, which elongates the design, but makes opening them in a tight space tricky.

The Pro_cee’d is most different at the back, with a bumper that is a little on the fussy side, although the new taillights, which sit up on curvy haunches, look great. The small tailgate is light and easy to lift up, but has quite a small opening and high lip.

Despite the sportier body, there’s the same 380-litres of boot space as the regular Cee’d (1,225-litre with the rear seats folded). Rear seat room is impressive too, with enough head and knee room to carry adults in comfort.

The dash design is a little sober when compared to the exterior, but it feels solid and is made from some classy materials. The TFT display on the dash is a decent resolution, and is clear and easy to read, while the seven-inch touchscreen sat-nav on our SE-spec test car was intuitive to use.

While the Pro_cee’d’s exterior is sporty and sharp, the way it drive is more grown up than you might imagine - and that extends to the drivetrain, too. We tested the quiet, refined and relatively torquey 1.6-litre diesel, which is a good match for the car, with nicely spaced gear ratios that allow you to keep the turbo on boost.

Unfortunately gear shift isn’t quite as precise as we’d like, and if you do miss-time a gearchange, the engine bogs down significantly until the turbo spins back to life. It’s at its best when cruising, however, where there’s barely a whisper of wind noise, and any diesel rattle from the engine settles down.

The ride isn’t as firm and sporty as the looks might suggest either. Instead, it’s similar to the five-door Cee’d, offering excellent absorption of speed bumps and remaining comfortable around town. The trade-off for this is that body control suffers slightly when you’re driving quickly on a twisty road.

The steering is vague, too, even with the FlexSteer system set to Sport, which adds more weight, meaning that while the car’s looks might encourage you to drive quickly, the car’s dynamics are rather more laid back.