For the past two years, Kia has been telling us not to treat it as a budget manufacturer, and instead to line its models up against the mainstream class leaders. Well, the time for talk is over. 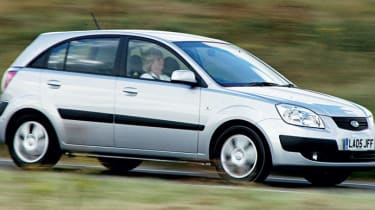 The Rio is the best Kia on sale in the UK. The Picanto gave us hope the Korean firm could build good small vehicles, and this model continues the trend. We still have issues with some aspects of the interior, but overall it feels well made, and the responsive diesel is the pick of the range. Few superminis deliver this much punch for just over £9,000.

For the past two years, Kia has been telling us not to treat it as a budget manufacturer, and instead to line its models up against the mainstream class leaders. Well, the time for talk is over.

The all-new Rio has just arrived here, complete with a punchy diesel engine. But has it got what it takes to rival Ford and Vauxhall in the supermini sales charts?

Study the Rio for the first time, and it's clear the designers have adopted an attitude of 'if you can't beat 'em, join 'em'. The car looks similar to the Fiesta - which was widely criticised for its styling when it first appeared. It's not ugly, but it could have done with more flair. Thankfully, the rear is smarter than that of its awkward predecessor, with clear indicator lenses and a curvy C-pillar.

Inside, the step up in quality is evident. A few hard plastics can still be found, and the leather steering wheel and gearknob feel cheap, but it's hard to fault the way it's screwed together.

The design is clean and fresh, helped by the silver trim in our top-spec LX car, and the switches are logically laid out. If only Kia would fit a proper radio instead of an aftermarket unit, the Rio would feel as good as many European rivals.

Thanks to a taller and wider body than the previous-generation machine, the new model is spacious, too, with lots of adjustment on the driver's seat allowing a comfortable position for all shapes and sizes. But the Rio's trump card is its diesel engine. For many buyers, the 1.5-litre unit's 60mpg economy will be a big enough incentive, yet it also offers an impressive turn of pace.

In-gear punch is near class-leading, while smooth and quiet cruising makes it a capable motorway car. Unfortunately, the Rio's chassis is less competent. The vague steering is off-putting in corners, while the gearbox is rubbery, too. After trying an early left-hand-drive model, we had been concerned the ride was a bit bouncy, but this has been cured, and the Rio is now perfectly capable of dealing with bumps and broken road surfaces.

As you'd expect with a Kia, the newcomer offers excellent value for money. For £9,295, you get metallic paint, a CD player, air-conditioning, split-fold rear seats and six airbags as standard. If you want traction and stability control, you'll have to add the £1,000 Dynamic option pack, which also includes a sunroof.

So it's an impressive package. Kia's image is on the up in the UK, and the Rio is a valuable addition to the range. It meets its rivals next week for a full group test, but it looks as if there's a new contender in the supermini class.