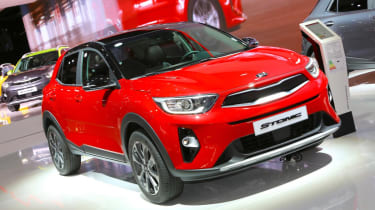 Kia has announced UK prices for it’s new Stonic SUV, introducing five versions of the car with two trim levels and three different engines that will be available from launch.

Meanwhile the ‘First Edition’ trim drops the entry-level 1.4-litre engine, offering the  more expensive 1.6-litre diesel with 108bhp and 260Nm, as well as a 0-60mph figure of 10.9s and 67.3mpg. The 1.0-litre turbo petrol is also available here and is the most powerful of the range, with 118bhp and a 0-60mph time of 9.9s, although economy suffers at 56.5mpg. All models come with a six-speed manual gearbox, and an engine start/stop system as standard. 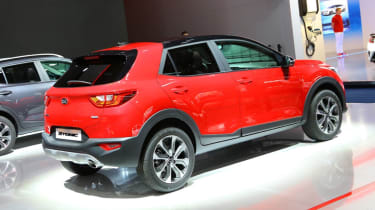 Order books for the latest addition to Kia’s line-up are now open, and the Korean brand expects it to become one of its best-selling UK models after it goes on sale on 23 October.

The small SUV market is booming and Kia is chasing a slice of the profits: the Stonic is set to sit beneath the Sportage and Sorento in the range, and will take on the Nissan Juke, Renault Captur, and new Hyundai Kona.

In order to make the new Rio-inspired crossover stand out in this increasingly crowded marketplace, Kia promises this is its most customisable car to date.

In ‘2’ guise, a seven-inch display provides a DAB radio and MP3 compatibility. ‘First Edition’ models get a seven-inch touchscreen providing navigation and infotainment, combined with Kia connected services and TomTom. Apple CarPlay and Android Auto, however, are standard across the range. 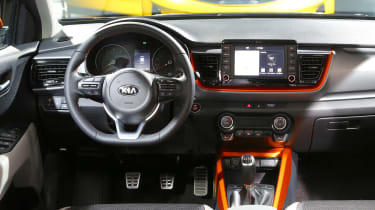 Kia promises that space won’t be at a premium, with generous leg and headroom, plus class-leading shoulder room. In the back, a two-step floor will allow ‘First Edition’ owners to expand or shrink the 352-litre boot to suit their needs.

In terms of design, contemporary Kia cues such as the ‘tiger-nose’ grille and strong, swept headlights define the Stonic’s face, but Kia has made an effort to distance the crossover from the Rio hatchback on which it’s based. Looking down the side of the car, sharp creases and kinks are found near the door sills, while the window line kinks upwards, too. Rugged-looking black plastic cladding runs in a ring around the bottom edge of the car and around the wheelarches, giving the crossover a tougher stance. Similarly, brushed metal skidplates are found front and rear.

Kia has turned to past concept cars to influence the design – the ‘targa’-style roof loop at the C-pillar is plucked from the Provo coupé concept of 2013. In the cabin things take on a much more Rio-inspired bent. The dash is near identical, while the switchgear is carried directly over. Again, lots of customisable colour schemes are promised.

Hybrid versions of the Stonic could appear in the future by adapting the technology underpinning the Niro. All Stonics will be front-wheel drive only, and will come as standard with Kia’s seven-year/100,000 mile manufacturer warranty.

Are you tempted by the new Kia Stonic? Let us know in the comments area below...