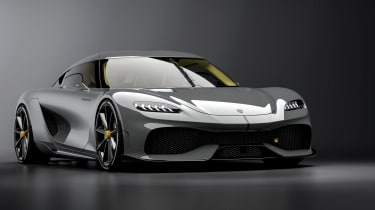 Koenigsegg has launched a new, mid-engined grand tourer to rival the recently launched McLaren GT. Called the Gemera, it’s a four-seat, plug-in hybrid hypercar that can cover the 0–62mph sprint in just 1.9 seconds on its way to a top speed of 248mph. Production will be limited to just 300 units.

The Gemera is powered by Koenigsegg’s in-house developed plug-in hybrid electric powertrain, which has a combined output of 1,700bhp and 3500Nm of torque. The system comprises a mid-mounted twin-turbocharged 2.0-litre three-cylinder petrol engine (which produces 600bhp and 600Nm of torque by itself), a 16.6kWh battery pack and three electric motors – one for each rear wheel, and one for the front axle.

Koenigsegg has dubbed its small-yet-powerful three-cylinder petrol engine the Tiny Friendly Giant. The company says it has an estimated fuel consumption 15–20 percent less than a traditional 2.0-litre four-cylinder petrol engine with direct injection and a variable valve timing. Cold-start emissions are also 60 percent improved over a conventional engine. 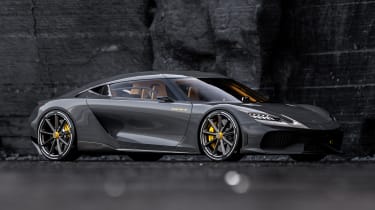 As a Freevalve engine, instead of being controlled by a camshaft, the Tiny Friendly Giant’s intake and exhaust valves are controlled by a computer and series of hydraulic actuators. The system can independently open and close the valves depending on driving conditions, in combinations that either maximise performance, regulate emissions, or minimise fuel consumption.

The Gemera’s battery pack offers a maximum all-electric range of 50km (31 miles). When coupled with its 75-litre fuel tank, Koenigsegg’s latest hypercar has a maximum claimed range of 1000km (roughly 620 miles) between fuel stops or recharging.

Like the Koenigsegg Regera, the Gemera’s petrol engine is mated to Koenigsegg’s Direct Drive single-speed transmission, which sends its power to the front wheels via a torque tube. It’s mated to the engine via a locking hydraulic coupling (similar to a torque convertor), which has a clutch-slip mechanism that allows the engine to gain revs. The remaining 1,100bhp of the Gemera’s maximum output is supplied the electric motors. 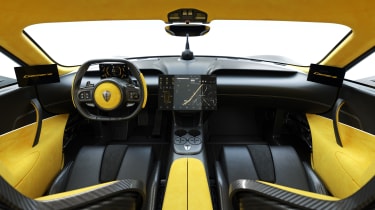 The rest of the Gemera is as complicated as its powertrain, with an all-wheel torque vectoring system, independent rear-wheel steering, adjustable dampers, an electronically adjustable ride height and a set of enormous ventilated ceramic disc brakes.

The front and rear subframes are made from aluminium, and the car’s entire monocoque is constructed from carbon fibre. As such, the Gemera has a kerb weight of just 1,850kg, and a power to weight ratio of around 920bhp per tonne – better than the Ariel Atom V8.

Koenigsegg recently confirmed that prices for the Gemera will start from an eye-watering $1.7 million (around £1.4 million). Production will also be limited to just 300 units globally.

In parallel with 2D sketches a variety of quick 3D designs were built directly by our designers. A theme is only valid if it works on the model and with the technical package. #koenigsegg #cardesign #hypercars #design #supercars #gemera #jesko #automotive #digitaldesign

A post shared by RAW DESIGN HOUSE (@raw.designhouse) on

Koenigsegg’s design chief, Sasha Selipanov, has released a handful of renders and sketches which detail the design process of the Gemera hypercar.

Selipanov’s 3D renders show five alternate versions of the Gemera’s front-end styling, each with slightly different headlight and air-intake designs. The production version ended up with a lower front bumper with a broader one-piece intake – although the four-seat layout and enormous vertically opening doors remained constant throughout the design process.

What do you make of the new 1,700bhp Koenigsegg Gemera? Let us know in the comments section below…