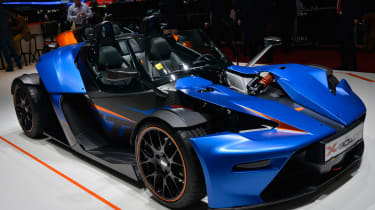 KTM has revealed a new, more user-friendly version of it’s track-biased X-Bow at the Geneva Motor Show. The X-Bow GT adds a windscreen and side windows, making long trips a possibility for the first time.

Based on the 300bhp X-Bow R, the GT gets a slightly detuned version of the 2.0-litre turbocharged Audi-sourced engine, with 285bhp and 420Nm of torque. Performance figures are yet to be released, but judging by the X-Bow R expect a 0-62mph time of around four seconds and a top speed of around 140mph.

Full specs have yet to be announced, but KTM has revealed that the front and side screens can be heated and that a wiper with a screen wash system is available as an option.