Lamborghini's 759bhp Centenario Roadster is limited to just 20 cars, all are sold out 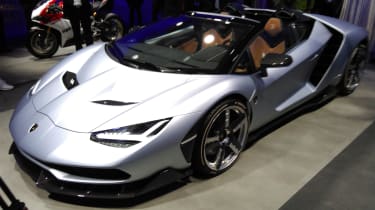 We've already seen the striking Lamborghini Centenario coupe, but now the hypercar has lifted its lid at the 2016 Paris Motor Show. This, the Centenario Roadster, was first revealed at 'The Quail' car show, part of Monterey Car Week in California.

Both cars have been built this year to celebrate Ferruccio Lamborghini's 100th birthday, hence the Centenario name, and both versions are limited-run: just 20 units of each will be built. They're not cheap, with a price tag of around £1.75million for the Roadster but don't worry too much as all models are now sold out.

The styling hborrows from the Aventador, but in typical Lambo style it's taken to the extreme. The sharp creases, jagged edges and super-low stance are the same as the coupe, with the lack of a roof not impacting on the design too much. 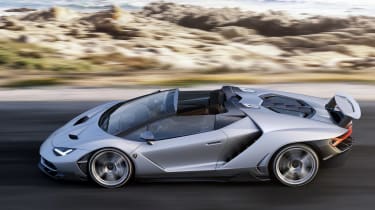 The car's 6.5-litre V12 produces the same 759bhp as the coupe, which means the car manages 0-62mph in just 2.9 seconds thanks to Lambo's four-wheel drive system, with a top speed of over 217mph.

Lamborghini's rear-wheel steering features on the car, which also feature engineering tech such as a carbon fibre monocoque chassis and bodywork. Inside there's internet, web radio and Apple CarPlay, in case the sound of that V12 engine isn't enough for you.

"This unique engineering achievement is a befitting tribute to Lamborghini’s extraordinary past and a preview of its brilliant future," said Stefano Domenicali, Lamborghini CEO.

What do you think of the Centenario Roadster? Let us know below...

The supercar manufacturer has officially entered the world of esports, with a one-make race series in Assetto Corsa Competizione