Land Rover set a new Guinness World Record for the largest LEGO structure ever built as it launched the all-new Land Rover Discovery.

The 13-metre high replica of Tower Bridge used 5,805,846 individual LEGO bricks - breaking the previous record by 470,646. The bricks laid end-to-end would stretch for almost 200 miles, the equivalent of London to Paris where the 2016 Paris Motor Show got underway as the car was unveiled.

The structure took five months to complete and was set up in Packington Hall, Warwickshire just a few miles from Land Rover's Solihull factory where the new seven-seat SUV will be built. The UK's only LEGO certified professional, Duncan Titmarsh led the project to topple the record. 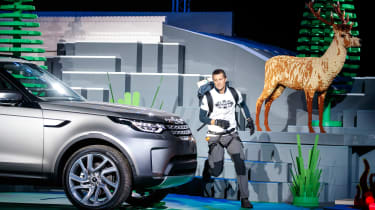 Grylls abseiled from the top of the LEGO model through the open drawbridge, while Sir Ben drove the new Discovery through 900mm-deep water beneath the bridge, towing a 186,000-brick LEGO replica of his Land Rover BAR boat in which he'll challenge for the America's Cup next year.

Grylls said: "The Land Rover Discovery is invaluable on expeditions, whether filming in deserts, jungles or mountains, yet it’s still the perfect vehicle for the family's everyday use. It's a proud moment to be here with Land Rover revealing the new Discovery to the world." 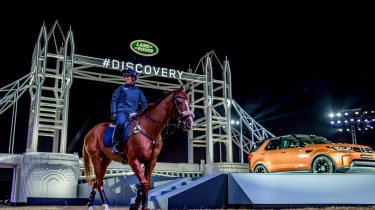 Flanking the bridge were two "Discovery Zones" with Phillips present in the Equestrian Zone complete with a traditional British picnic made from LEGO bricks. The other zone, entitled the Bear Grylls Adventure Zone, featured LEGO fire and boulders.

Emma Owen, LEGO UK and Ireland spokeswoman, said: “We are thrilled that Jaguar Land Rover has used LEGO bricks to add some Guinness World Record-breaking creativity to the launch of the latest Discovery.

"This is an epic, outstanding build that absolutely captures the imagination in a way we haven't seen before. With LEGO bricks and some imagination you really can build anything.” 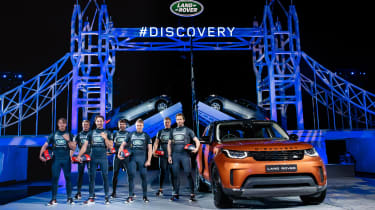 The reveal aimed to highlight the key aspects of the new Discovery, focusing on Land Rover's desire to go "above and beyond" with on-road and off-road capability alongside its 27-years of heritage.