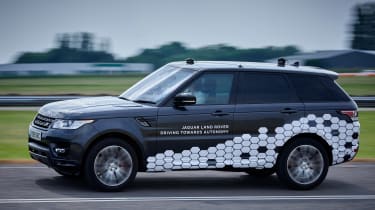 Jaguar Land Rover has revealed its latest step towards a production autonomous vehicle by showcasing a Range Rover Sport kitted out with prototype technology that enables it to operate on its own in an urban environment.

The research technology is called Autonomous Urban Drive, and JLR says it places the firm closer to achieving ‘level four’ self-driving vehicles within the next decade.

Being level four, it can carry out an entire journey in a specific environment without the person sat in the driver’s seat needing to intervene. This particular Range Rover Sport is being trialled in a specially made urban environment at the MIRA proving ground, complete with traffic lights, T-junctions and roundabouts.

Passengers select a destination, and the development vehicle can work out the best route on the fly, navigating the complex road scenarios drivers are often presented with in cities.

Urban autonomous driving isn’t the only thing on JLR’s mind though - the firm’s ultimate goal is to develop fully- and semi-autonomous vehicles that are capable both on-road and off-road.

JLR’s Autonomous Urban Drive technology is being demonstrated as part of a £20 million research project conducted by UK Autodrive, bringing together leading technology and automotive businesses with local authorities to trial self-driving cars. As such, JLR is also working alongside Ford and Tata to test car-to-car connected technologies.

Following the final trials at MIRA, JLR will take its tests to public roads around Milton Keynes and Coventry by the end of the year. Initially, these tests will take place on closed roads, but will evolve into open-road tests with real traffic in 2018.

Will JLR be a key player when autonomous cars begin to hit the market? Tell us your thoughts in the comments.