The Land Rover Discovery 4 Commercial, is a premium 4x4 van for those who require ultimate off-road ability, or an impressive business image 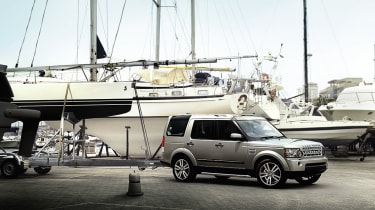 Land Rover has offered a commercial version of its Discovery for some years, originally through its special vehicle operations department. With Discovery 4, the Commercial is listed as a regular model, providing a premium 4x4 van for a premium price.

The Discovery delivers an excellent on-road drive and, of course, superb off-road capability. It will also tow up to 3,500kg (3.5 tonnes), putting it alongside the Mitsubishi Shogun Commercial and pick-ups like the latest Ford Ranger. It has a fairly limited load area and payload capability, but the Discovery isn’t purchased as the ultimate load carrier. For a regular visitor to farming or construction sites, or for a contractor that needs to tow on a regular basis, the Land Rover offers capability and image, for a price.

You can choose between the base 3.0-litre TDV6 engine, offering 210bhp, or the more powerful 3.0-litre SDV6 with its mighty 255bhp output and an incredible 600Nm of torque. Both engines drive through an eight-speed automatic transmission to a constant four-wheel drivetrain.

Maximum combined fuel consumption is a claimed to be 32.1mpg and the engine emits 230g/km of CO2. That puts the Land Rover slightly behind the Mitsubishi Shogun Commercial, but ahead of premium pick-ups like the Nissan Navara V6 and the Ford Ranger. Service intervals are set at 16,000 miles/12 months, and the Discovery 4 is covered by a three-year/unlimited-mileage warranty.

Land Rover removed the rear seats and added bonded panels to the rear side windows of the Discovery 4 before installing a flat load bed and a two-piece split bulkhead, with a solid lower half and a mesh upper section. Offering around 2.1 cubic metres of load volume, the Discovery is capable of carrying up to 657kg of payload, which falls slightly behind the long-wheelbase Shogun van, and is much lower than the 1 tonne carrying capacity of a 4x4 pick-up.

The Discovery van retains the split tailgate design, making it easy to load smaller objects without having to fully open the back. Twin side loading doors also make it easy to get to loads behind the bulkhead. As mentioned, a 4x4 pick-up is a far more capable load carrier, while vans like the Volkswagen Transporter 4Motion offer much of the all-wheel drive capability with considerably more load space and payload.

If you must have an SUV-based van, the options are the Mitsubishi Shogun and Outlander Commercials, or, for half the price, the SsangYong Korando CSX. However, that won’t be able to tow nearly as much as the Discovery, which offers the full 3,500kg capability. This is equal to the long-wheelbase Shogun and to the Ford Ranger pick-up, but is considerably more than most pick-ups and light vans, making the Discovery an attractive proposition for anyone considering long-distance towing, such as site cabin delivery and portable toilet installation. The Discovery’s legendary off-road capabilities also make the Commercial ideal for construction and agricultural applications, where the requirement to stray far from the road makes real 4x4 ability essential.

For off-road work you also get Land Rover’s hill descent control and gradient release control systems, which prevent the vehicle running away on slippery hills. Inside the cab, the Discovery comes with four airbags, an audible seat belt warning, and auto door locking when driving away. If you're thinking of towing, the Commercial also gets Land Rover’s trailer stability assist system, which aims to prevent the trailer swaying under braking or cornering.

Land Rover does have something of a reputation for reliability concerns on some models, though much of that seems to be on older vehicles. That said, there are plenty of customers who wouldn't buy anything else and have never experienced a problem.

Being based on a premium SUV, the Discovery 4 Commercial is unsurprisingly a pleasure to drive. The base TDV6 offers a more than healthy 210bhp and the optional SDV6 model comes with a mighty 255bhp, which is enough to propel the big Land Rover along swiftly. The eight-speed automatic transmission slurs imperceptibly between gears, though you also get paddles behind the steering wheel if you want more control. Once in the higher gears, the revs drop away and the Discovery becomes an accomplished motorway cruiser.

On country roads and in town, the Land Rover hides its bulk well and offers nimble manoeuvrability. The four-corner electronic air suspension soaks up the bumps while reducing much of the roll found in the big Shogun. Light controls and a panoramic all-round view help to position the van in traffic. Though offering a similar power output as the Shogun Commercial, the Discovery is well ahead on the road, with that ultra-smooth transmission making light work of any journey.

The Discovery Commercial is not a low-budget purchase, and this is reflected in the cab. Automatic climate control, a two-piece full bulkhead, front and side airbags, a digital radio, Bluetooth and extremely comfortable seats should keep most driver’s happy.

However, being based on the car range, there's also a host of options available to those with deeper pockets. This includes cruise control, a heated front windscreen, Xenon headlamps and a range of navigation systems. There are also equipment packs dedicated to the Commercial. The Commercial Convenience Pack (£1,058) includes a front parking aid, front fog lamps, auto headlights, rain sensing wipers, puddle lamps and footwell lighting, heated windscreen and washer jets. The Commercial Luxury Pack (£2,750) incorporates cruise control, leather seats, a Harman Kardon audio system with 11 speakers and touchscreen navigation.

Perhaps of more use to those regularly venturing out in bad weather, there is a Commercial Cold Climate Pack (£950), which includes heated steering wheel, seats, windscreen and washer jets.