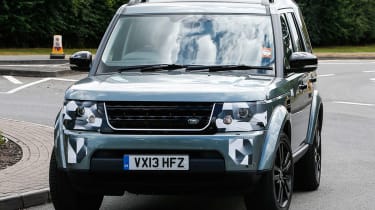 Our spy photographers have caught a near-production version of the new facelifted 2014 Land Rover Discovery.

Although visually, it looks as if not much has changed, the biggest alterations are beneath the skin. The new 2014 model is ditching its naturally aspirated 5.0-litre V8 – although this wasn’t available in the UK – in place of a more frugal supercharged V6 unit.

Poised to get the supercharged 375bhp 3.0-litre V6 engine from the Jaguar F-Type, the new Discovery will boast superior performance while reducing CO2 emissions and fuel consumption. There is also the possibility this engine could be made available in the UK.

Because of its engine layout, the new Discovery is unlikely to get the nine-speed gearbox found in the Range Rover Evoque and is expected to stick with the eight-speed ZF gearbox from the current car.

Cosmetic changes include new LED strips like the ones on the new Range Rover. The grille has also been slightly modified, with elliptical cut-outs for the headlights. The interior is likely to get a new dashboard and steering wheel.

Prices for the 2014 Land Rover Discovery are expected to start around £38,000, with first deliveries being made in the first quarter of 2014.