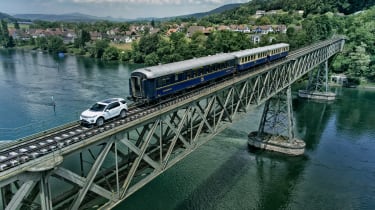 The Land Rover Discovery Sport is certified to pull a maximum of 2.5 tonnes on the road but on the rails it can go way, way beyond that. In a new video from Land Rover the Disco Sport pulls a full size train weighing over 100 tonnes; almost 60 times its own weight.

The Discovery Sport achieved this feat in its standard form on an 85ft high bridge in Switzerland. The model doing all the hard work was powered by the Jaguar Land Rover 178bhp Ingenium diesel engine which generates 430Nm of torque.

The only modifications on the Discovery Sport were the addition of rail wheels to act as 'stabilisers' to keep it on track, fitted by British road-to-rail 4x4 conversion specialists Aquarius Railroad Technologies.

According to Land Rover, the stunt was pulled off thanks to the Discovery Sport’s All Terrain Progress Control which automatically manages engine output and braking, acting like a low speed cruise control, so that the driver can focus on the road, or in this case, the tracks. 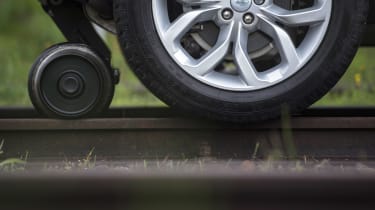 Echoing a similar challenge that the Discovery I, did back in 1989, Land Rover hoped the stunt would demonstrate the 'strength and capability' of the Discovery Sport.

Karl Richards, Lead Engineer for Stability Control Systems at Jaguar Land Rover, said: "Towing is in Land Rover's DNA, and Discovery Sport is no exception. Over the years, we have introduced game-changing towing technologies to take the stress out of towing for our customers. I've spent most of my career travelling to the most punishing parts of the world to test Land Rovers in gruelling conditions, yet this is the most extreme towing test I've ever done."

What do you think of latest stunt from Land Rover? Let us know in the comments below...