An interesting new sporty 4x4, the Sport handles well and is fast, but is it too similar to the larger Range Rover? 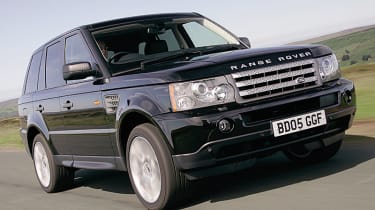 Driving: The Range Rover Sport is fitted with Terrain Response, a low-ratio gearbox and height adjustable air suspension, so can venture into places most rivals fear to tread. Fortunately, as it's an urban SUV intended mainly for on-road use, it doesn't fare badly in handling terms, either. With very light steering, the British off-roader feels vague turning into corners, but once loaded up it grips well and stays level. The Range Rover Sport is responsive to gearbox and brake inputs too. The auto transmission has a good manual mode and the brakes are resistant to fade. However, even on motorways the ride is a touch unsettled and doesn't isolate you from bumps as well as you might expect. But V8 petrol engines provide searing pace, particularly the 4.2-litre Supercharged model. The Jaguar unit burbles beautifully and proves fast. The V6 diesel, also supplied by Jaguar, is slower but just as smooth and refined.

Marketplace: Queues of customers are waiting to get their hands on the Range Rover Sport. It's therefore a shame the styling is toned down compared to the show-stopping Range Stormer concept. It's too similar to the Range Rover. The single five-door bodystyle comes with a choice of three engines, all sourced from Jaguar: 4.4-litre and 4.2-litre supercharged V8 petrols, and a 2.7-litre V6 diesel. All variants are costly, even entry-level S variants, and the options list can add £1,000s to those figures with ease.

Owning: Sharing the Discovery 3's underpinnings, the Range Rover Sport sits on a shorter wheelbase, which saves a little weight - but it still tips the scales at over two-and-a-half tons. A tall car, the driver has a great seating position in a fine interior. We particularly like the raised centre console that puts the gearlever close at hand. It's button-laden but easy to get on with; the instruments, however, are confusingly labelled. The unconventional split tailgate - both halves open upwards - reveals a giant boot that extends to more than 2,000 litres with the seats folded. Rear occupants have little to complain about when the bench is in place, ether. It's very well equipped, but then so it should be, given heady list prices. At least it retains a very high percentage of that figure - good job as petrol models have an insatiable thirst, while servicing is hideously expensive too.