Our first review of the new Range Rover Sport SDV6, which gets a 3.0-litre V6 turbodiesel engine 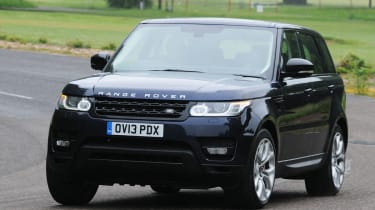 Land Rover’s onslaught of new cars continues with the all-new Range Rover Sport and, again, it’s a massively impressive machine. More spacious than its predecessor (and with the option of seven seats) the Sport is sleeker to look at and wonderfully luxurious inside. The big story though is its weight loss, which has helped to hack back fuel consumption and taken the handling to another level. Sharp but light steering and very little body roll means it behaves like a car half its size in corners, but is happy to be a laid-back, refined and comfortable cruiser when you dial it down.

The problem with the first-generation Range Rover Sport is that it was never particularly sporty. Based on modified version of the heavy steel chassis in the Land Rover Discovery it tipped the scales at over 2.5 tonnes, which hampered its fuel economy and ability to go around corners. But the all-new Sport, co-developed with the full-size Range Rover, should have no such problems.

Based on a modified version of the Range Rover’s all-aluminium platform, it weighs 420kg less than its predecessor - equivalent to the combined weight of the British Lion’s front row, plus 100kg of luggage. The result is the 288bhp SDV6 model we drove, in Autobiography Dynamic trim, sprints from 0-62mph in 6.8 seconds (a full two seconds faster than the old SDV6), but returns 37.7mpg and 199g/km of CO2 – a 15 per cent improvement.

It’s bigger than the old car, too, measuring 62mm longer, 55mm wider with a 178mm longer wheelbase. It’s this new wide-set stance, with short overhangs and a more steeply raked windscreen, which give the Sport its less boxy, contemporary look. Cynics will say it looks too much like an Evoque on growth hormones, but that’s hardly a bad thing.

Climb onboard and Land Rover has worked its interior magic once again. Every surface is covered in either stitched leather, chunks of metal or soft-touch rubber. A new small-diameter steering wheel feels and looks special in your hands, while the visibility from the elevated driving position is excellent. The rear seats are quite snug for such a large car, while an optional third row of seats (not fitted to our test car) rises electronically from the boot floor and is really only suitable for kids.

Perched above other traffic, the Sport still feels like a very large car. It doesn’t so much weave as squeeze through city traffic – but somehow you never feel stressed. The combination of impeccable refinement and cushioned ride from the all-aluminium air suspension provide a barrier between you and the outside world. In fact, with the eight-speed ZF gearbox blurring its ratios perfectly, and its light-but-precise electric steering, around town the Sport does an excellent impression of its bigger brother.

Venture onto more open roads though and the Sport’s agility begins to shine through. Switch the Terrain Response system to Dynamic mode and the dials glow red, while the throttle response and gear changes sharpen up significantly - as a result the Sport punches forward the moment your right foot twitches. In reality this 3.0 V6 diesel delivers all the performance you need, but if you much have the 503bhp supercharged 5.0-litre V8 (the only other engine available from launch), the signs are that the chassis can handle it.

Making such a large car react in a sporty way is no simple task – hence why Land Rover has thrown its full arsenal of chassis control systems at the Range Rover Sport. These include continuously variable dampers, twin-channel Dynamic Response active lean control, a rear locking differential and torque vectoring by braking the inside wheel. The result of all this technology working away underneath you is that at the point when you expect body roll to occur, it miraculously doesn’t.

The Porsche Cayenne still has the dynamic edge, but then it can’t deliver the same cosseting ride when you’re not driving flat out, or the level of refinement when your cruising on the motorway. And then there’s the Sport’s off-road ability. It’s still not match the Range Rover, but with 51mm more ground clearance than its predecessor, a new automatic mode for the Terrain response system and suspension that can be raised or lowered by 185mm, it’s more capable than ever.