Striking 2+2 supermini concept is the smallest Lexus ever, but is at least four years from production 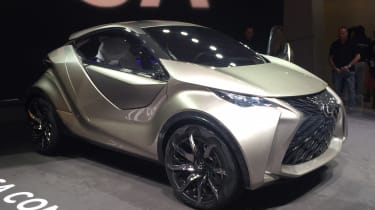 Lexus has this week revealed a potential rival to the MINI and Audi A1, with its sights firmly set on the premium supermini class. The radical LF-SA concept was revealed on Tuesday at this year's Geneva Motor Show, though European boss, Alain Uyttenhoven, insisted we won't see a production-ready version for at least four or five years.

The tiny 2+2 city car is a dramatic preview of how the smallest Lexus ever could look and the brand's European design studio – the team tasked with creating the concept – hasn’t held back. However, it was purely intended as a design study, with Lexus continuing to focus on upmarket and luxurious models such as the latest NX SUV, and forthcoming GS F performance saloon.

Uyttenhoven said: "Everybody asks, when is the car coming to production? I say, you're going to be disappointed – not in the next four or five years – just because it's not in the plan. 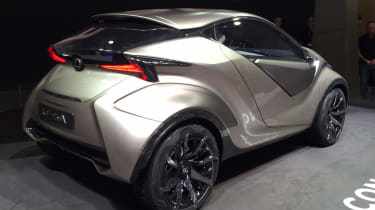 The compact dimensions are clearly a huge plus when it comes to manoeuvrability and usability around town, and are born out of research by Lexus into how customers actually use their cars. City cars, says Lexus, often only have one person on board, so priority is given to the driver, with a fixed seat, but movable pedals and steering wheel. The passenger seat slides back and forth to allow access to the rear.

A high centre console cocoons the driver, while the interior surfaces are angular, but smooth and uncluttered. The infotainment system includes a hologram-style digital display incorporated in the instrument cluster and a wide-angle head-up display. The overall interior design is said to be "inspired by the spectacle of a solar eclipse". 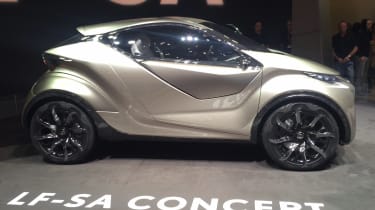 It’s the exterior design that should really turn heads, though, next to the more conservative competition. Up front is a wild interpretation of the spindle grille with an arrowhead mesh design that points towards the badge. Either side of that are deep slits housing LED running lights, while the slim headlamps eschew the boomerang design from the IS and GS.

With the wheels pushed to the extreme corners of the car and contrast-coloured panels on the doors, above the wheelarches and on the floating roof, the LF-SA looks like nothing else on the road. Lexus calls it an "emotional execution that illustrates Lexus’ passion for upcoming design trends".

Lexus also claims drivers of the LF-SA will benefit from "the last word in on-board connectivity, infotainment and safety", as well as "never losing sight of the requirement for driving pleasure". However, there’s no word yet on what powertrain is under the skin. Given Lexus’ expertise with hybrid technology, a petrol-electric combination is likely, although a full-electric set-up would also suit an urban supermini of this size.

As we mentioned, the a car similar to the LF-SA is at least four or five years away – but that doesn't mean we won't see some of the innovative design cues sooner. The CT 200h will remain the smallest Lexus for the time being, but expect the next-generation model to be more boldly styled, with the company's signature grille and sharp headlights.