The Lexus hoverboard is real and it works

Lexus has gone Back to the Future with a working hoverboard, but hold on kids, it's unlikely you'll ever be able to buy one 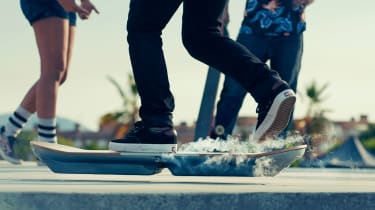 First the good news, Lexus has built a hoverboard and it really works. Toyota's premium car brand has released the final video showing the hoverboard in action at a skate park in Barcelona, Spain, following a succession of teaser clips hinting that it had indeed shunted the hoverboard from science fiction into reality.

In the video, pro skateboard rider Ross McGouran is shown riding the hoverboard over ramps and banked corners as well as travelling over water. All the time, the Lexus hoverboard floats an inch or two off the ground with wisps of smoke emerging from its internal workings.

But, predictably, the hoverboard isn't quite as magical as it looks. Lexus credits 'magnetic levitation technology' with helping its thick, wheelless skateboard apparently defy gravity. The hoverboard only works on specially constructed tracks with permanent magnets creating a magnetic field on which the board can float.

The technology for what Lexus refers to as project 'SLIDE' was developed by Lexus in partnership with German research institute IFW Dresden and superconductor specialists Evico GmbH.

The hoverboard itself contains two 'cryostats', reservoirs filled with superconducting material that must be chilled to -197 degrees. To do this they must be submerged in liquid nitrogen, the source of the smokey special effects in the videos. The result is that the board does indeed hover and the force holding it up is strong enough to support a rider through a series of reasonably strenuous stunts. 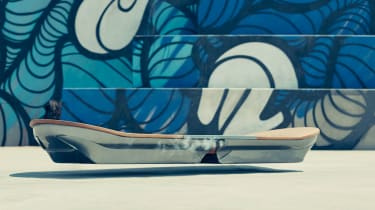 "I've spent 20 years skateboarding," said McGouran after riding the hoverboard, "but without friction it feels like I've had to learn a whole new skill, particularly in the stance and balance in order to ride the hoverboard. It's a whole new experience.”

It all means that hoverboards aren't about to make their way onto streets near you, unless those streets happen to be laced with high-powered magents, and our Marty McFly Back to the Future fantasies will have to wait a little longer before being fulfilled. That's a shame but Lexus has indeed built a working hoverboard, it deserves some kind of credit for that. Now it just needs to find some kind of automotive application for the technology.

What do you think of the Lexus hoverboard? Let us know in the comments section below... 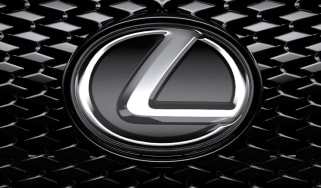