The stunning new Lexus LC, based on LF-LC concept coupe, will rival the Mercedes SL; both the V8 and hybrid V6 version are on sale now 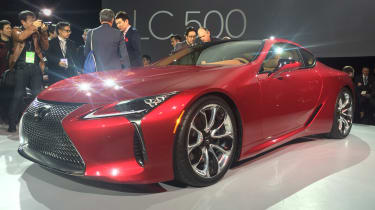 Lexus has revealed full prices and specs for its big new flagship coupe – the LC – and order books are now open.

With first deliveries touted for June, both the V8 powered LC 500 and V6 hybrid powered LC 500h coupes get the same price tag at £76,595 starting.

Both cars also come with optional Sport and Sport+ packs. The basic package introduces cosmetic tweaks such as 21-inch alloy wheels, a carbon fibre roof to replace the glass panoramic setup, leather an Alcantara upholstery plus sports seats for an extra £4,000. Meanwhile, Sport+ builds on these additions with four-wheel-steering, a limited slip differential, new Variable Gear Ratio steering and a retractable rear spoiler. It’s a £9,000 premium over the standard car. 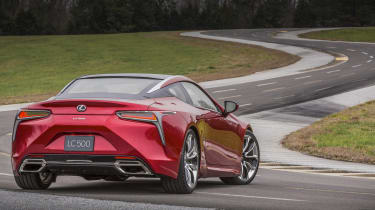 The LC is the production version of the LF-LC concept car. Renamed for production, the LC features slightly toned down styling from that dramatic concept car. The trademark angular Lexus grille graces the front, while the sharp detailing and shape is reminiscent of the LFA supercar.

The triple-LED headlamps have been designed with some of the world's thinnest projectors to allow such a neat shape. The exterior angles are also designed to increase aerodynamic efficiency and engine cooling, with the rear air diffuser and optional active rear spoiler playing a big part in the former.

Step inside, and you'll find the LC already has one up on the SL thanks to its 2+2 seat layout. The interior design is fresh and borrows some elements from the LFA, including the racy instruments and driver-focused layout.  Materials such as magnesium for the paddle-shifters give a premium touch, while the driving position is said to exploit the car's low centre of gravity. 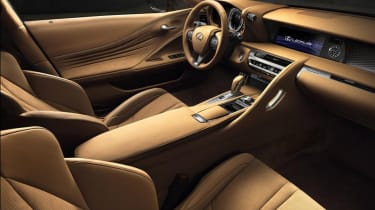 "Everyone, engineers included, wanted to make this car as close as possible to the LFA's philosophy". There's no high-revving V10s here, but the LC 500 does get a 467bhp, 527Nm 5.0-litre naturally-aspirated V8 from the firm's 'F' performance range.

It also gets a 10-speed single-clutch automatic gearbox, a Lexus first, which the company says is lighter than a number of eight-speed dual-clutch transmissions on the market. 6-piston brakes and a newly developed traction-control system helps reign in the power. Lexus is 'targeting' a 0-62mph time of 4.5 seconds. 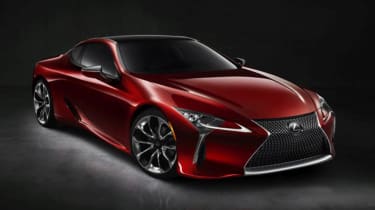 It's built on the firm's new 'GA-L' rear-wheel drive architecture, and is said to feature weight-saving materials such as carbon composite doors and a carbon-fibre roof. Aluminium components are also used in the suspension. It can claim a 52/48 weight distribution as a result.